Skip to content
A fine-looking building on Pall Mall, it has been a place of both great artistry and outlandish disrepute
Victor Keegan

Observe 80-82 Pall Mall and be bemused by this brazen anomaly interrupting the architectural calm of London’s clubland. It has no parallel in Britain, according to the architecture writer Ian Nairn. That is partly because it is a floridly designed “beery” 17th century Dutch building, but also because what you see is not what you get.

The house dates back to 1698, when it was built for Meinhardt, the third Duke of Schomberg, who commanded the right wing of William of Orange’s Protestant army against the forces of the deposed James II during the controversial Battle of the Boyne in 1690.

The right-hand side of Schomberg House is as it was originally, except for one thing – it is only a facade. The left-hand side is also a facade, but a fake one. It was reconstructed after going missing for a hundred years. It was a fine piece of invisible mending, as it is impossible to see where the fake facade starts and the original ends.

That is not the case with the beautifully preserved classical statues supporting the portico. They are made of the hardwearing artificial Coade stone made at Eleanor Coade’s manufactory, which was across the river where the Royal Festival Hall now stands.

The house has its origin in war, but its later history is a chronicle of art and sex. Its artistic renown began when John Astley, a fashionable portrait painter, took over the lease in 1769 and built himself a studio on the roof overlooking St James’s Park. He rented one wing to Thomas Gainsborough. When Gainsborough left, many of his paintings were sold at an exhibition held at Schomberg House and the rest at a later auction held by Christie’s, whose business was started in Pall Mall.

Richard Cosway, another fashionable artist and miniaturist, lived in Schomberg House from 1784 to 1791 with his artist wife Maria (see below) and a former slave, Ottobah Cugoano, who was their servant. One of Cosway’s paintings shows a servant in attendance. It is almost certainly Ottobah, who became an active abolitionist in the Sons of Africa group. 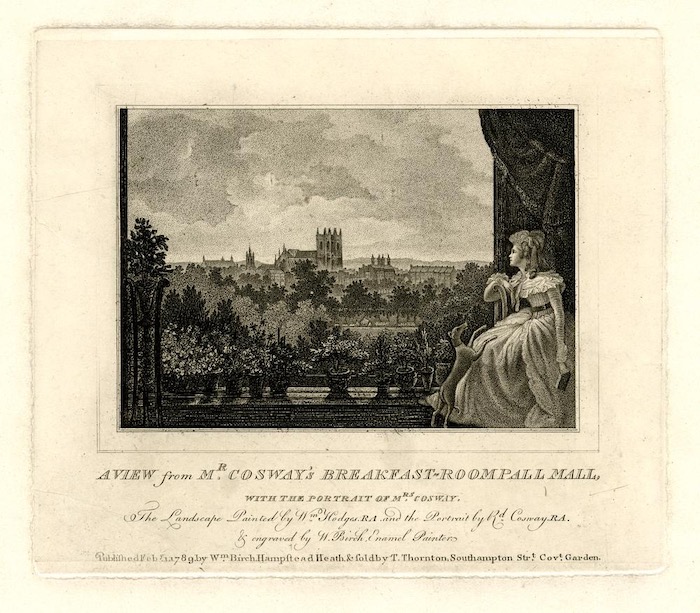 It is interesting that two of the rare paintings of former slaves at that time were by artists associated with this house. After he moved to Bath, Gainsborough painted Ignatius Sancho, the black African who became a distinguished man of letters. Cosway also painted a miniature of the Prince Regent’s “wife”, Maria Fitzherbert, which the Prince wore for the rest of his life.

In 1794 Shakespeare made his presence felt when James Woodmason moved his New Shakespeare Gallery from Dublin to Schomberg House to provide competition for James Boydell’s Shakespeare Gallery in the same road at No 52, which contained over 180 paintings specially commissioned from contemporary artists.

It was not all high culture at Schomberg House. In 1781, a Scottish quack doctor called James Graham opened a “Temple of Health and Hymen” there. Advertisements for it boasted of “medico-electrical apparatus” and a “grand celestial state bed” supported by 40 pillars of brilliant glass with near naked “goddesses” in attendance, including Amy Lyon, the future wife of Sir William Hamilton and mistress of Nelson.

The “temple” was covered by a dome lined with mirrors with coloured sheets, and played music. It later turned out to be a high class brothel that was closed by the police. Let’s go no further.

Schomberg House was eventually returned to the military in 1859, when all three sections were occupied first by the War Office and later by the Director of Barrack Construction. Since then, despite being dominated by offices, Schomberg House has remained a rare example of a 17th century town house. Or at least the facade of one.