The government’s latest measures to curb a resurgent coronavirus infection rate can prompt unhappy flashbacks to the spring and summer lockdown along with fears that it will return in full: the elderly isolated indoors or perishing in care homes before their time; weary NHS staff and PPE shortages; the panic buying and rationing of food. But looking back can also bring reminders of Londoners’ kindness in the face of those anxieties and pressures – kindness of the type that has continued to flow from the Panas Gurkha restaurant in Lewisham, SE13.

The generosity of proprietor Sujan Katuwal (pictured left, below) has won him the Queen’s Award for Voluntary Service and made him a man sometimes thanked in the street, in part due to an ITV London News appearance. It began with hand wipe donations to Lewisham Hospital, followed by fruit and vegetables, which the restaurant, having been forced to close its doors, could not use. Food donations were picked up by staff from a collection point outside and Panas Gurkha loaned fridges to keep it fresh. Then came the meals: hundreds of portions of rice, birianis and chicken curry with “a Nepalese twist” collected from the restaurant every Tuesday morning. 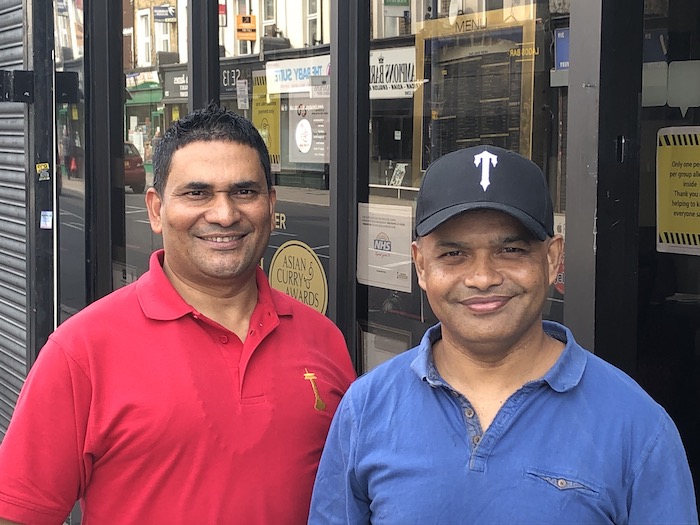 Sujan’s endeavours crossed borders: a week volunteering for a charity in Islington; giving to a hospice, street homeless people and a community centre in Lewisham’s next-door-neighbour borough Greenwich, which prompting a big public thank you from council leader Dan Thorpe. His right hand man throughout has been his friend and head chef Ram Paudal (pictured right), a collaborator on and off for many years. Sujan describes the help given to rough sleepers as “something very close to me and my missus during the pandemic”.

But throughout, Panas Gurkha – the name combines that of a Nepalese ceremonial lamp and famous town – has also remained a business, which Sujan, a resident of Charlton, has been running for nearly ten years. Takeaways kept things ticking over through lockdown – “without those customers, I cannot be here” – but not much more than that. Re-opening under Covid measures, aided by Rishi Sunak’s “eat out to help out” scheme, brought a welcome return of table service. The Chancellor’s help ran out at the end of August, but Sujan has kept the discount going at his own expense throughout September, describing this as a way of thanking loyal customers.

Panas Gurkha became busy again. When we met at the restaurant one recent lunchtime, Sujan explained that he’d been rotating his staff, spreading the still-diminished work available among them. Ram has handled the cooking, with Sujan concentrating on being the host. “My job is just chatting to people,” he joked. A light appeared at the end of the tunnel. As well as regular customers there were newcomers, drawn to the light of Sujan’s local fame.

But then came Boris Johnson’s “rule of six” and Sujan sensed an instant fresh retreat. Already, his calculation was that “it will take me a minimum two years to get back to normal”. Now, normal feels a little further out of reach. I asked Sujan if his relationship with his customers, especially his regulars has changed as a result of the pandemic. He said he’s liked politicians characterising Panas Gurkha as a community restaurant and marvels at “the amount of support I get from my community”. Sujan, like so many others in London’s hospitality sector, is going to keep on needing that goodwill. He has good grounds for hope: “What I’ve noticed during this pandemic is that thing money cannot buy.”