Not many clowns have parks named after them or have their lives written up by famous authors. Joseph Grimaldi, a master of his craft, had both. Charles Dickens edited his biography and Grimaldi himself is buried in Joseph Grimaldi Park, a former churchyard, not far from King’s Cross station (see photo).

Grimaldi was a clown’s clown. The most popular entertainer of the Regency era, he was reckoned to be the “funniest and best loved” man in the theatre. He knew riches but, like so many of his kind, there was unhappiness behind the mask. He died a pauper, depressed and alcoholic.

Grimaldi spawned thousands of imitators, who adopted his pioneering antics. As with all comedians he had a catchphrase, “Here we are!”, which became nationally famous.  Dickens apparently shouted it as he bounded into the foyer of the Tremont hotel in New York on one of his literary tours.

Clowns have been around in one form or another since Egyptian and Greek times. They appeared in England with medieval minstrels or as jesters in the court, in Italy as Harlequins, and in France as Pierrots. Shakespeare used the comic actors William Kempe and Robert Armin as clowns, who often improvised.

Some trace British clowns back to the buffoons of the medieval mystery plays planting the seeds for the likes of Grimaldi, who was the template of the modern circus clown with his whitewashed face, red nose and slapstick comedy, even though he didn’t actually do circuses. His lasting influence has been recognised for decades through a memorial service held each year at the Holy Trinity church in Hackney, which attracts hundreds of costumed clowns from around the world. 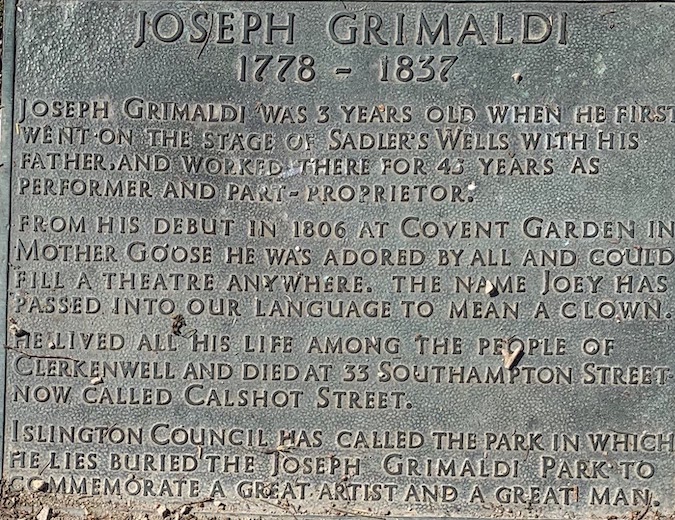 Sadly, Grimaldi’s life echoed the joy and sadness of a typical clown’s routine. He was born in 1778 in Clare Market, a very poor area of London, where the London School of Economics campus now stands. His father was an entertainer and a serial philanderer with at least ten children from various mistresses. He brought young Joseph into his shows at an early stage until he became a star in his own right, notably at the Theatre Royal, Drury Lane and the Sadler’s Wells and Covent Garden theatres.

Grimaldi had his failures – Puss in Boots was booed off the stage in 1818 and closed after one night – but in general he was so extraordinarily successful that clowns became known as “Joeys”. His most successful show was the highly profitable Mother Goose in 1806, which made a record £20,000 in profit in the currency of the day and ran for 111 performances over two years at the Covent Garden Theatre. Grimaldi himself was dissatisfied with his performance. Others thought it a work of genius.

He eagerly took up provincial gigs as they paid better. He played Scaramouche in a revival of Don Juan in Cheltenham based on Byron’s original poem, after which he met the famous poet in nearby Gloucester. Instead of Grimaldi being impressed by Lord Byron it was the other way round. Byron said he felt “great and unbounded satisfaction in becoming acquainted with a man of such rare and profound talents”.

But Grimaldi’s steadily declined later in his life. From 1828 until 1836 he had to rely on charity payments. He was almost crippled and his wife Mary suffered a stroke shortly before the death of their son. He could still make light of his condition: “I make you laugh at night but am Grim-all-day” he quipped, but the end was near. The pair made a suicide pact but the poisons only produced stomach aches and the plan was abandoned. After Mary died in 1834, Grimaldi moved to 33 Southampton Street, Islington (now Calshot Street) where he ended his years.

On May 31 1837, despite feeling chest pains, he had his final night at his local pub, The Marquis of Cornwallis (now defunct), where he apparently spent a convivial evening entertaining fellow customers and drinking to excess. He was found dead in bed by his housekeeper the following morning. The coroner concluded that he had “died by the visitation of God” which probably wouldn’t have surprised the Prince of Clowns.

He was buried on 5 June 5 1837i n St. James’s Churchyard, Pentonville, which was later renamed in his honour.