Sir Thomas More was an ascetic who often wore a hair shirt and submitted to execution rather than admit that his former friend Henry VIII was head of the Catholic Church in England and not the Pope. When younger, he contemplated becoming a monk. But as he ascended in public life to become Lord Chancellor, he built a mansion – Beaufort House in Chelsea – which was bigger than most monasteries.

British History Online says of it: “It yielded to no other house in importance, not to King Henry VIII’s manor house in Cheyne Walk, nor to the Earl of Shrewsbury’s mansion, nor to the old manor house with which it shared the dignity of a proprietary chapel in the old Church.”

More’s mansion stretched all the way from Cheyne Walk beside the river up to the King’s Road to the north (so called because for much of its early existence it was the King’s private carriageway). The top of the gardens and the adjoining kitchen garden ran along King’s Road roughly from Milman’s Street to opposite the Bluebird Restaurant.

At the river end, the property stretched from the bottom of the same Milman’s Street to Church Street, a substantial length either side of Battersea Bridge. If you walk down Beaufort Street towards the bridge today, you are walking on top of part of More’s considerable garden, leading to the landing stage where he would have taken a boat to the Palace Of Westminster.

If you stop by the spacious Moravian Garden, where King’s Road and Milman’s Street meet, you are where his stables used to be. It is now a burial ground for the Moravian Church, with four pollarded fig trees in the centre. They were not around in More’s time, but the walls on the eastern and southern sides were (photo above, right). When you are there it is easy to imagine yourself in a Tudor time warp.

The largest remains, however, are on the other side of Beaufort Street, where the original wall runs for almost its entire length from the river to the King’s Road. It is mainly hidden behind mansion blocks with historic names like Beaufort and Burleigh House. Much of it has been whitewashed, but it is definitely there and must be a strong candidate for the longest Tudor remains in London (photo below). 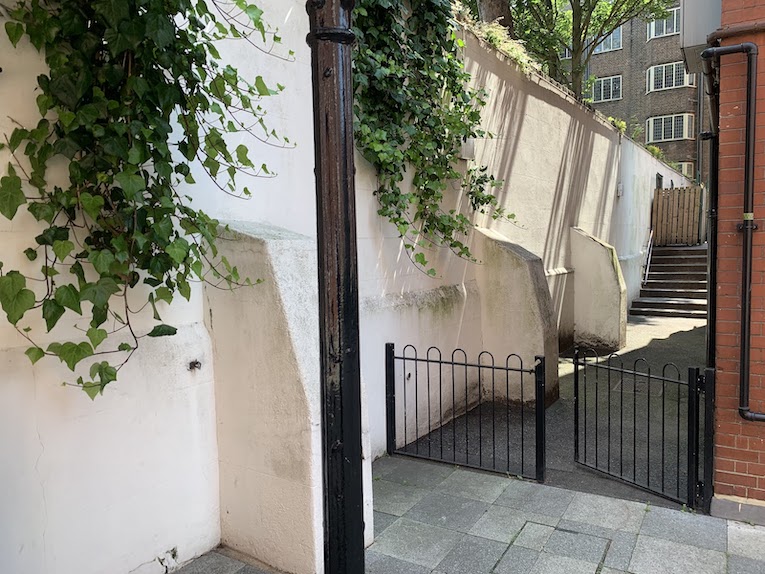 The size and calm of the garden must have looked to outsiders like a glimpse of the perfect world described in More’s literary masterpiece Utopia, which is still a global seller 500 years after its  publication – in Latin – at Leuven in Holland. Utopia was way ahead of its time in envisaging a world of universal adult voting, a six hour working day, a sort of national health service, religious freedom, state education and the ordination of women.

The catch was that the ideal society was to be implemented in a severely authoritarian way, with ale houses and other pleasures forbidden and free discussion of public policy ultimately punishable by death to discourage “subversion” of the constitution. This helps to explain one of the enigmas of More’s life. He died with heroic dignity as a true martyr, yet as Lord Chancellor he appears to have presided over the burning of “heretics”. So much for religious toleration.