The story of what remains of 277 Gray’s Inn Road begins 3,500 years ago. The site is presently called Hand Axe Yard. Why? Because in 1679 the remarkable discovery of a 3,500 year old axe was made nearby by archaeologists. The axe was acquired by Sir Hans Sloane and given to the British Museum as part of its founding collection. It is still on display, providing an unusual glimpse into early human history.

The address also offers a rather different glimpse into a more recent past. These days, we are trying to find ways of keeping cars off the roads, but in Victorian times the big challenge was reducing the number of horses on them. It is reckoned that by the 1850s there were around 25,000 horses moving around London on a typical day, providing the main means of transport for individuals and companies before the railways arrived.

The horses needed water – hence the troughs still scattered around the capital – and the authorities needed ways of dealing with the growing problem of, er, discharges. In 1894, the Times predicted that 50 years hence every street in London would be buried under nine feet of horse manure. The period would later be dubbed “The Great Horse Manure Crisis of 1894”.

Of course, the horses also needed places to stay, and where better than 277 Gray’s Inn Road, which started its modern life around 1827 as the rather unromantically named North London Horse Depository? It was rather a grand building (main image) for its purpose, though one patronising critic dismissed it as a “large courtyard, treated in stucco with some architectural pretension”. It occupied a large area between Gray’s Inn Road and today’s Birkenhead Street. The only bit of the architectural pretension still there are the remains of the entrance, which are Grade II listed. 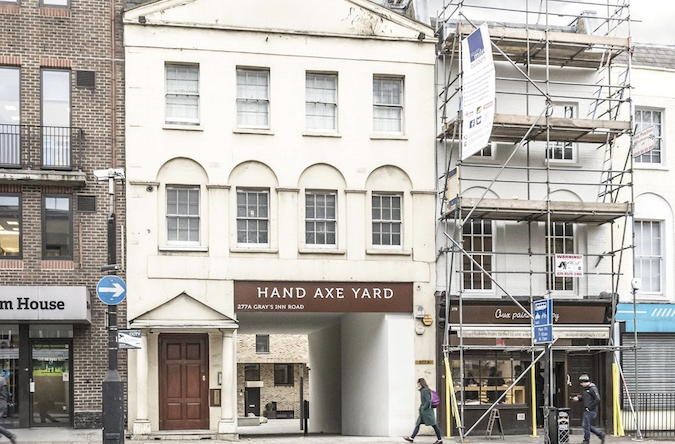 In 1829, a man named William Bromley relaunched the building as the Royal London Bazaar, an exhibition space for novelty attractions, including what has been described as a “panoramic picture in needlework of 1200 square feet” and 1834-35, the first permanent exhibition of Madame Tussauds waxworks was based there. But by then, starting in 1832, the building had also become a base for the pioneering socialist Robert Owen and his Equitable Labour Exchange.

Owen was an extraordinary man. He had not long returned from America, where, in 1824, he had, with is son William, founded a utopian village called New Harmony. It was based on 180 buildings he had purchased from an existing community called Harmony, run by a George Rapp.

In 1825, Owen addressed Congress and the House of Representatives about his vision for New Harmony. Among those present were three former presidents – John Adams, Thomas Jefferson, and James Madison – as well as the outgoing US president James Monroe, not to mention the president-elect, John Quincy Adams. Not many people since could claim such an audience.

However, nothing seemed to last very long at 277 Gray’s Inn Road. By the 1850s it was being used as a depository for goods rather horses, and by 1872 it was a bottling store for the brewers Whitbread. Even so, it is easy to imagine what might have been. Immediately to its north was the ill-fated Panharmonium leisure park and to its south of it was Bagnigge Wells, a successful spa and tea garden. Put together, these attractions could have formed an entertainment complex to rival the pleasure gardens to the south either side of the Thames, rather than a Bermuda Triangle of missed opportunities.

Today, 277 Gray’s Inn Road is marked only as 277A above the entrance to an award-winning residential development (photo above). But at least its name recalls the beginning of its story.