All Hallows-on-the-Wall is little noticed by cars speeding along London Wall, one of the busiest roads in the City. This is unsurprising as, from the outside, it looks like a warehouse with a tower attached when it is, of course, a working church which does a lot of charitable work. It rightly describes itself as being “on-the-wall” because it indeed stands above one – and no ordinary wall either but the original London Wall, built by the Romans.

It is a church of many quirks. Its predecessor on the site dated from the early 12th century and parts of the medieval structure are still visible along the approach to the entrance to the current one, with what remains of the Roman wall deeper underground. It was rebuilt its present form by the 24-year-old George Dance the Younger in 1767. The north wall of the church rests on the wall’s Roman foundations and its semicircular vestry rests on one of the wall’s bastions, or external fortifications.

There was design in Dance’s veins, as his father was George Dance the Elder, who built the Mansion House, but it was still a singular achievement for one so young that his first commission was to create a church on such a historic site.

As you enter the church, you move from its bland exterior to a blaze of whiteness with no columns to interrupt the pristine view. Your eye is immediately drawn to the quirkiest pulpit you have ever seen. It is stuck on the wall (to the left of the photo below) with no visible means of ascending to it. In order to reach the pulpit the preacher has to go outside the church and re-enter. As the London Wall once formed the perimeter of the capital, with open fields beyond, it would be said that preachers had to briefly leave the City of London before returning to deliver a sermon there. 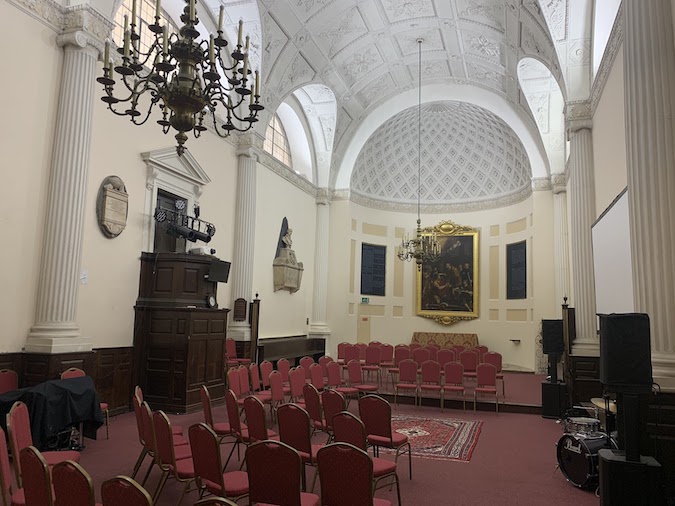 Proving his versatility, Dance went on to build the notorious Newgate Prison. The two institutions had something curious in common, in that occupants of both were incarcerated there. The difference was that Newgate’s were jailed against their will, while All Hallows was famous in olden times for its anchorites – hermits locked voluntarily in cells attached to the church for love of God.

The most famous was Simon the Anchorite who is mentioned in the medieval account book of the church in 1512 as one of a succession of anchorites or “ankers” who quite likely dwelt on the Roman wall at the point where the vestry now is. Anchorites were known for their piety and were the recipients of considerable offerings, most of which were passed on to the church.

The prison, which was closed in 1902 and pulled down two years later, also included a Roman wall. The Old Bailey courthouse was later erected on the site, and part of the wall can still be seen in its bowels. But anchorites are there none.