At some point in 1760 a place called Bagnigge House along what would be today’s King’s Cross Road (main picture) became suddenly famous. Important reserves were found under the ground. Not oil – it was a bit early for that. Not coal – it was too far south. What had been discovered was water.

It wasn’t run of the mill water from the nearby River Fleet, which ran parallel to the road, but mineral water from two springs in the garden of the house. They contained traces of iron, which was claimed to be good for the eyes.

John Davis, described as the proprietor, was in no doubt. He paid for publicity in the July 1775 issue of the Daily Advertisement to inform the public that: “both the chalybeate and purging waters are in the greatest perfection ever known”.

The poet W. Woty agreed. In Shrubs of Parnassus he wrote:

But taught at length by subtle art to flow,

They rise, forth from oblivion’s bed they rise,

And manifest their virtues to mankind.”

Not everyone accepted this – A Miss Edgeworth described a place of vulgar resort:

“The City to Bagnigge Wells repair,

To swallow dust, and call it air.”

It didn’t seem to matter. The area around Bagnigge was already a destination for countryside-seeking Londoners, and it took off after the discovery of the water. You don’t have to believe the house had been the summer home of Nell Gwyn, where she entertained Charles II in her inimitable way. But it is definitely true that Bagnigge Wells became an entertainment hotspot, attracting poets and peers as well as ordinary folk. 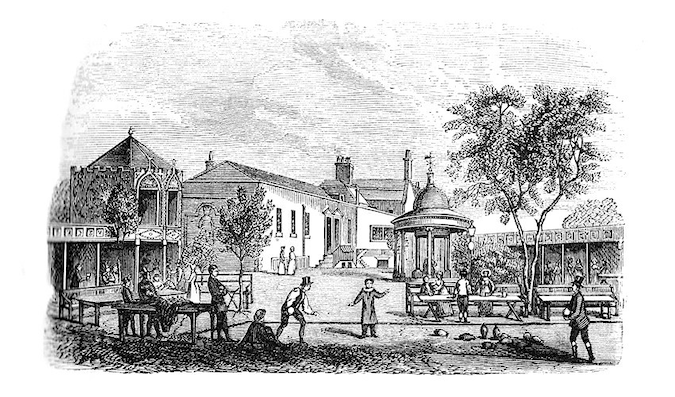 Hundreds of people came to drink the waters in the mornings and drink tea in the afternoons. There were several beautiful walks and a curious fountain representing Cupid bestriding a swan, which shot water to a great height, not to mention the willows and shrubs on the banks of the Fleet and the Bagnigge Wells Tavern.

It wasn’t the only hotspot in the area. Nearby was Sadler’s Wells, which was not at that time associated with music and ballet but the discovery of another mineral spring in 1683 for which health claims were made and around which Richard Sadler built an entertainment house.

These were tempting amenities for Londoners, who only had to leave Clerkenwell by way of today’s Gray’s Inn Road to be out of London. A map from 1746 actually shows a tiny community around “Black Mary’s Hole”, which the historian Cromwell says was named after a black woman named Woolaston who lived near one of the springs and sold the water. This is quite possible, as there were a lot more black people in London at that time than is generally known, though there have been other explanations for the name.

Like other pleasure gardens in London, Bagnigge went into decline and fall. Today, there is nothing of it left, though the period in which it flourished is acknowledged by a fascinating stone plaque behind a bus shelter which stands before numbers 61 and 63 King’s Cross Road. Its inscription says:

The Pindar of Wakefield pub was almost next door to Bagnigge. The late London historian Peter Jackson claimed the plaque was London’s oldest advert. 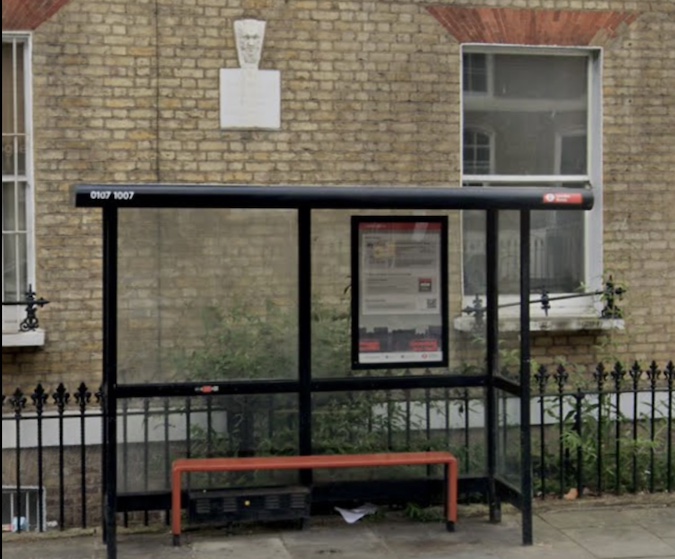 In 1863, the editor of The Builder magazine, George Godwin, welcomed the preservation of the plaque and later urged in an editorial that such tablets should mark the homes of famous inhabitants. Readers were enthusiastic and the Society of Arts – of which Godwin was a fellow – sponsored a scheme which eventually led to London’s iconic blue plaques. Surely, this white plaque deserves a blue plaque of its own.