Of all the things that can be said about William Beckford – and there are many – one of  the most intriguing is a question: what on Earth was going on inside his head?

Beckford was a prominent political figure in 18th century London – twice Lord Mayor of London, the MP for the City of London and a liberal who backed the radical John Wilkes, a journalist and fellow MP intimately associated with the catchphrase “Wilkes and Liberty”.

In 1770, following the release of Wilkes from one of his spells in prison, Beckford decorated his house, 22 Soho Square, with the word “Liberty” in letters three feet high. However, it doesn’t seem to have occurred to Beckford to extend the concept of liberty to the slaves on his 13 sugar plantations in Jamaica, which he’d inherited from his older brother Peter Beckford and had made him one of the richest people in England.

Though born in Jamaica, Beckford was educated at Westminster School and his headmaster, Robert Freind, would later say he was “one of the best scholars the school ever had”. Yet the hypocrisy of the man knew no bounds.

He was an active anti-abolitionist who, in 1758 during the Seven Years’ War, urged cabinet leader William Pitt to attack the French colony of Martinique. “The Negroes and stock of the island are worth above £4 million sterling and the conquest easy,” he advised.

Beckford was mainly an absentee plantation owner who used the proceeds of slavery to build up a vast art collection and the Fonthill country estate in Wiltshire. He gave lavish parties and fathered at least eight illegitimate children. He died in 1770, but controversy about him lives on. A statue of Beckford at the Guildhall has been at the centre of the debate about what to do with embarrassing monuments to the figures from the City’s past.

In October 1772, shortly after Beckford’s death, 22 Soho Square, which had been the centre of his political activities, began being used for something quite different when Dr George Armstrong made it the new base for his Dispensary for the Relief of the Infant Poor – an early seed of what eventually became the National Health Service. A doctor was in attendance on Mondays, Wednesdays and Fridays to give free advice to the poor (the other days of the week were for private patients).

William was not the only Beckford who resided in the area at the time. His younger brother Richard lived almost next door at 1 Greek Street – one side of which faces on to the square – and, according to the Survey of London, he improved the house considerably.

In 1811, after Richard’s death, it was taken over by the Westminster and Middlesex Commission of Sewers, and in 1855 Sir Joseph Bazalgette and the Metropolitan Board of Works moved in to mastermind the construction of London’s amazing sewer system. The building and its gardens were apparently the inspiration for the lodgings of Dr Manette and Lucy in Charles Dickens’s A Tale of Two Cities, which was published in 1859. The nearby Manette Street, formerly Rose Street, was later renamed in its honour. 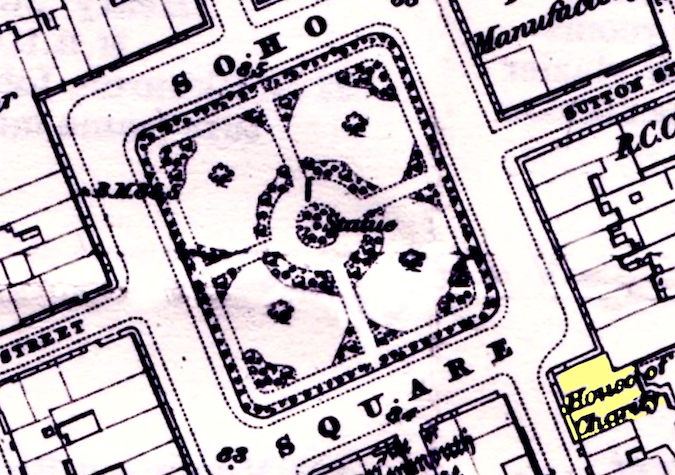 In 1862, in another abrupt change of use, the building became the base for work to help the homeless and took on the name House of Charity (see map above), which is still emblazoned on it (see main photo), although it is now called the House of St Barnabas. A Grade I listed building, it is notable for its rococo interiors and a chute on the Soho Square side through which petty cash donations can be posted day or night. As well as hosting a worthy charity, it is home to a not-for-profit members’ club – both are concepts the Beckford brothers would have found it difficult to understand.

On London strives to provide more of the kind of  journalism the capital city needs. Become a supporter for £5 a month (or £50 for one year) and receive a weekly digest of London news, views and information and free entry to six online events a year. Details here.