Harrow’s recent election results – adequate but not overwhelming Labour majorities in 2010, 2014 and 2018 – give a misleading impression of stability in the very complicated and volatile politics of the borough. Labour’s 2010 majority disappeared after a split in 2013, resulting in a short period of Conservative leadership until Labour rule was restored in 2014.

The approach of the 2018 elections made some London Labour people very jittery about Harrow. It was widely considered Labour’s most likely loss – even in good elections for a party, there is often one borough that goes the other way – but when the votes were counted Labour had increased their majority slightly from five seats in 2014 to seven in 2018. While Croydon is clearly Labour’s most vulnerable borough in 2022, there is still the occasional worried glance towards the north western suburbs.

Labour’s strength, and their fears of losing ground against the trend, are mostly to do with the dominant feature of Harrow politics: ethnicity. At the time of the 2011 Census the borough had the fourth smallest proportion of white British residents of any local authority in the country, at slightly less than 31 per cent (only Newham, Ealing and Brent had lower percentages). Harrow is London’s premier borough for people of Indian descent – 24.6 per cent of residents in 2011, the highest proportion other than the city of Leicester.

Harrow is a bit different from most highly diverse boroughs in that the largest minority community is Hindu rather than Muslim. Trends in Hindu and Sikh voting behaviour have a strong effect on the politics of the borough, and these can be distinctive. This affects individual wards particularly strongly, but influences the whole borough – even Pinner, the least diverse ward in Harrow, was 38 per cent BAME in 2011.

The rise of the ethnic minority population has tended to help Labour in Harrow; BAME voters tend to support Labour more than white voters of the same income, age and class. But the effect has been more muted than in Redbridge, a similar suburb which has swung massively to Labour, because middle class Hindus are more ambivalent about Labour than most minorities. Some of this is to do with entrepreneurialism and class, some to do with communal issues like caste discrimination and Kashmir. Narendra Modi addressed a huge rally at Wembley Stadium in November 2015. Conservative campaigners drew attention to the Kashmir issue in the 2019 election.

It is hard to escape the conclusion that there were sectarian voting patterns in the 2016 and 2021 mayoral elections. Sadiq Khan, a Muslim of Pakistani heritage, polled particularly badly in the strongly Hindu wards of Harrow. The 2016 Zac Goldsmith mayoral campaign did not refrain from stooping to insinuations that Khan posed a threat to Indian families’ gold jewellery. Even so, the impact seemed restricted to the mayoral ballot.

Voting behaviour in Harrow can vary wildly depending on candidate and context, even on the same day. In May 2021 Labour’s London Assembly candidate Krupesh Hirani won every ward which had Labour councillors bar Kenton West while in the Mayoral election only four wards out of 21 gave Khan more first-choice votes than Tory Shaun Bailey. In several wards with particularly large Hindu populations the gap between Labour’s mayoral and Assembly performance was enormous: in Kenton East Hirani was three points ahead but Khan was 26 points behind.

Even so, the borough is diverse – there are Harrow Muslims, Jews, young white professionals and older suburbanites. And not everything in Harrow is about ethnicity. Whatever the solution to the Kashmir question might be, it will not be a London borough council’s job to find it. Voters in local elections are influenced by national politics and the here-and-now of how well their council is performing, council tax levels and local traffic issues. Harrow is neither a star performer nor a basket case. So, let’s look at the geography of this election.

The basic divide in Harrow electoral politics is between Conservative north and Labour south. The north of the borough, at the edge of London itself, is composed of a string of strongly Conservative voting suburban idylls between Pinner and Stanmore, mostly built between 1920 and 1939 and overwhelmingly owner-occupied. Three wards are in London’s top thirty for the proportion of detached houses, an indicator of affluence and comfort.

The southern tier also consists mostly of inter-war suburbia, although of a less luxurious variety than the north. Labour’s strength has different bases in different areas – social tenants in the west around Roxbourne, young professional renters in central Harrow and diverse suburbia to the east around Kenton.

The population in Labour-voting south Harrow has grown relative to the Tory north, and this is reflected in the ward boundary changes this year which take a wrecking ball to this Tory fortress. The Conservative north loses some representation and sees some northern wards stretched southwards. Under the previous ward boundaries this area had 24 councillors out of 63 in Harrow; all but one of the eight wards (Headstone North) returned a large Conservative majority in 2018.

Three Tory strongholds are reduced from three to two seats – Hatch End to the west and Belmont and Canons along the upper reaches of the Jubilee Line in the east. Three retain more or less their shape and safe Conservative status – Stanmore, Pinner and Pinner South (where there was a by-election in October 2021 https://www.onlondon.co.uk/harrow-council-by-election-win-maintains-tory-progress-in-london/). Harrow Weald gains some probably Labour-voting territory to its south, making this ward potentially marginal; Headstone North ceases to exist and its closest successor, North Harrow, is a marginal of as yet unknown proclivities. So, of the 24 northern Tory seats, 15 survive intact, five are now marginals and four have vanished entirely.

Labour’s lead across most of the southern wards is adequate rather than entirely comfortable. In council elections Labour should be able to count on two wards in the south west (Roxbourne and Roxeth, for five councillors), three in central Harrow (Greenhill, Headstone and Marlborough, for nine councillors) and the two Wealdstone wards (four councillors). If any of these 18 seats turn blue, the Tories have almost certainly won. Otherwise, we are down to the 22 seats in the nine marginal-looking wards. The table ranks them, approximately, in order of how propitious they look from the Conservative point of view. 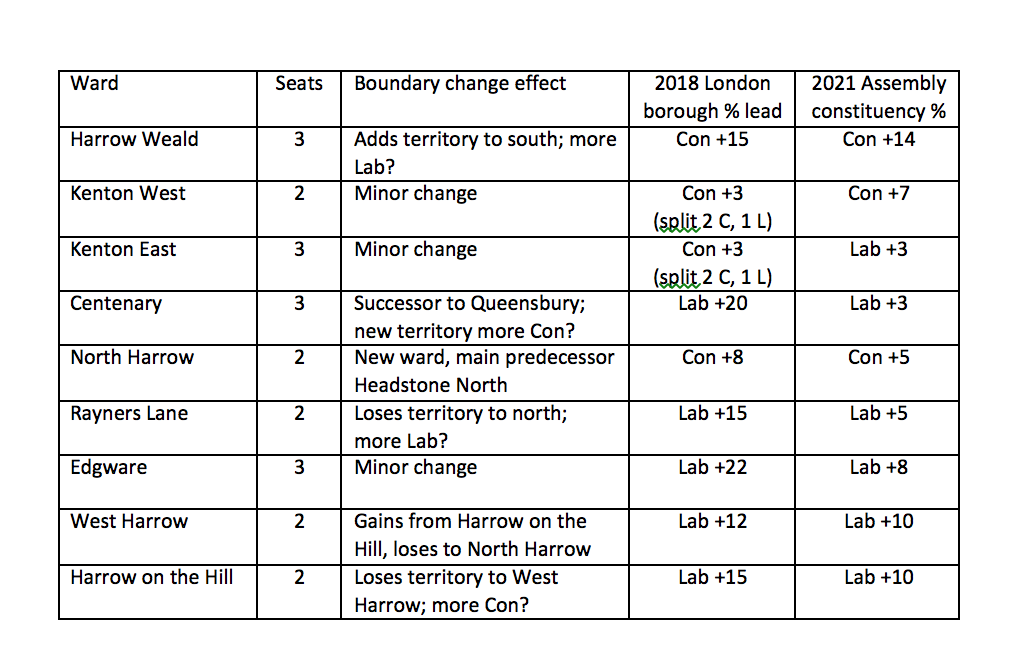 The Conservatives will feel optimistic in the two Kenton wards, on the border with Brent. These are the heartland of British-Indian suburbia; Kenton East was 45 per cent Hindu in 2011. While Kenton West tends to be marginal, Kenton East had been consistently Labour until a Tory by-election win in 2017 which was confirmed in 2018. However, the 2021 Assembly result suggest that Labour should not be counted out. Assuming the Tories win Harrow Weald and all the Kenton seats, this gets them to 23, five short of a majority.

Centenary and North Harrow are probably the pivotal wards in the battle for control of Harrow council. Centenary is a revived name for a ward in the east of the borough covering the area around Queensbury. Queensbury voted solidly Labour from 2002 until 2018, except in 2006 when it elected one Conservative out of three councillors, but not by overwhelming margins.

The Conservatives are helped by the boundary changes. Compared to the old Queensbury, Centenary is shifted northwards and takes some streets from the Tory strongholds of Belmont and Canons. It would have voted Labour in 2018, but not by the 20-point margin the party had in Queensbury. The same factors that have supported the Conservative vote in Kenton apply to Centenary; this is middle class, home owning Hindu territory. Labour can just about win a majority in Harrow without Centenary, but it seems unlikely that the Conservatives can.

Most of the new ward of North Harrow was previously in Headstone North, a ward with an interesting history. It has mostly been Conservative, but Independent candidate James Bond won a seat here in 2010 and was re-elected alongside fellow Independent Georgia Weston in 2014. Both stood down in 2018 and while the ward voted Conservative Labour came a surprisingly close second and then closed the gap even further in the 2021 Assembly election. Georgia Weston is now one of the Labour candidates in North Harrow, indicating that the party is making a strong bid to win the ward on its new and more favourable boundaries. The two Conservative contenders are sitting councillors from Headstone North.

There are Conservative prospects in several more wards where Labour had relatively small majorities in 2018 and 2021, but these are more distant hopes and depend on some heroic campaigning overturning adverse demographic trends or, in the case of Edgware, a hyper-diverse electorate. One of the Tory candidates in Rayners Lane is Thaya Idaikkadar, once Labour leader of the council (and then leader of the Independent Labour Group in the 2013 split). Harrow politics is always a roller-coaster.