Activists, campaigners and politicians – and of course Londoners themselves – are well aware that millions of people in London live in poverty. They also know that people’s chances of living in poverty are deeply affected by who they are. Poverty is more likely for women (especially mothers), black and Asian Londoners, LGBT Londoners and Londoners with disabilities, and these inequalities intersect. Poverty in London is is also distinctive for being more strongly driven by housing costs, as the latest Joseph Rowntree Foundation report on UK poverty shows (see graph below). 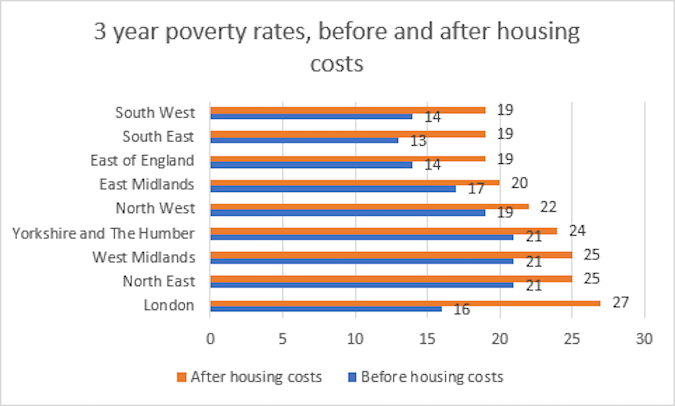 But in recent years it has often been difficult to get this message across. This makes it harder for London local and regional government, and for charities and community groups, to make the case that Londoners experiencing poverty and disadvantage need more help from central government. Some of this is about simple electoral arithmetic: the Conservatives calculate that appealing to “red wall” voters will get them more seats at the next election than appealing to London voters. But the roots of London’s problem with defining its needs go deeper, far beyond the political upheaval of the 2019 general election.

Part of the problem is that when people say “London” in the media or public debate they’re often not referring to the geographical place or to the nine million people who live here. In discussions about policy and politics “London” often means the UK government, as in “Welsh council defies London to declare St David’s Day holiday” (presumably most London residents are not concerned about Welsh public holidays). This shorthand is, of course, common and longstanding in international reporting: write-ups of UN summits often read as if a group of large cities were trying to manoeuvre themselves into a conference room. This may be becoming more common in domestic reporting too.

The second issue with London-as-shorthand is perhaps more subtle: the idea that there is a distinct set of “London values”. Put positively, these are about being modern, liberal and cosmopolitan. Put negatively they are about being stuck up, snooty and out of touch. The idea of London being different is hardly new, but the current framing seems to have crystalised in the late 1990s and early 2000s with the perception that senior New Labour politicians were mostly Londoners. It never really went away, but was perhaps in abeyance in the coalition years from 2010 before returning to public discussion in 2016 when Londoners were more likely than people from most other parts of the UK to vote remain in the Brexit referendum.

A further set of challenges is not specific to London. This is about how we talk about poverty and inequality in the 2020s. Poverty in the UK is widespread, complex, and usually caused by structural factors – in London, high house prices are often the culprit. But media discussion tends to be about individual causes – perhaps characterised sympathetically as a run of bad luck, though more often negatively as people being profligate or managing their money badly.

Campaigners have sometimes dealt with such judgements by talking about specific needs: fuel poverty, food poverty, period poverty. This makes sense as an advocacy tactic but risks obscuring the structural problem: if people had enough money, they could afford to buy tampons. In a horrible way, the pandemic may have changed this in the short term. Many people’s financial circumstances got worse very fast, and Marcus Rashford and his supporters drew attention to the vast number of people suddenly unable to afford the basics.

Poverty is by definition unequal and often caused by other inequalities: of ethnicity, gender, region, health, the list goes on. Talking about inequalities has never been easy, partly of course because people with power and influence often benefit from them. In some ways it feels as if we’ve made progress in the last few years: compulsory gender pay gap reporting has forced conversations about men’s and women’s earnings, the Black Lives Matter movement pushed ideas about systematic racism into public discussion, and more people are talking about intersectionality and overlapping disadvantage.

But discussion also seems to have become more polarised, particularly around perceived generational differences (“boomers” and so on) and about public heritage, with furious arguments about whether statues of slave owners and imperialists should stay or go. The two tropes are sometimes connected by talk of whether things are “woke” or “anti-woke”. Commenting about the needs or views of different groups can feel like wading into a culture war.

There is no doubt that many have strong feelings about how people of different ages do and should behave, and about who should be commemorated and how. Disagreement is normal, and dividing people into tribes endlessly tempting. But the narrative of divide probably doesn’t reflect people’s real lives.

Our polling at Centre for London suggests that while there are generational differences in Londoners’ concerns and priorities they are often not huge: in fact, older Londoners are more likely to worry about house prices for young people than young people themselves are. Looking for the similarities between groups and the differences within them might give us an easier way into discussions about who needs what from public policy.

Claire Harding is Research Director at think tank Centre for London, which is running a major project for 2022 on “levelling up” and what it means for London. Find out more about their research by clicking here.