London’s newest railway, the Elizabeth Line, finally opened across its full length today with no serious initial problems and amid great excitement among public and staff alike.

Passengers queued in the morning rain at Abbey Wood station, where the very first train on the newly-opened section departed at 6:30 this morning after a ceremonial cutting of purple ribbon, with one arriving two hours early to make sure he got a place.

Sadiq Khan and Transport for London commissioner Andy Byford were at Paddington at the opposite end of the new part of the line, which stops at Woolwich, Custom House, Canary Wharf, Whitechapel, Liverpool Street, Farringdon and Tottenham Court Road, though not yet at Bond Street, which is not  ready for use.

The huge, 200 metre-long trains rains departed every five minutes, including from spectacular new stations. The only hitch came at Paddington at about 8:30 am when a fire alarm went off, leading a brief evacuation of the new station there. 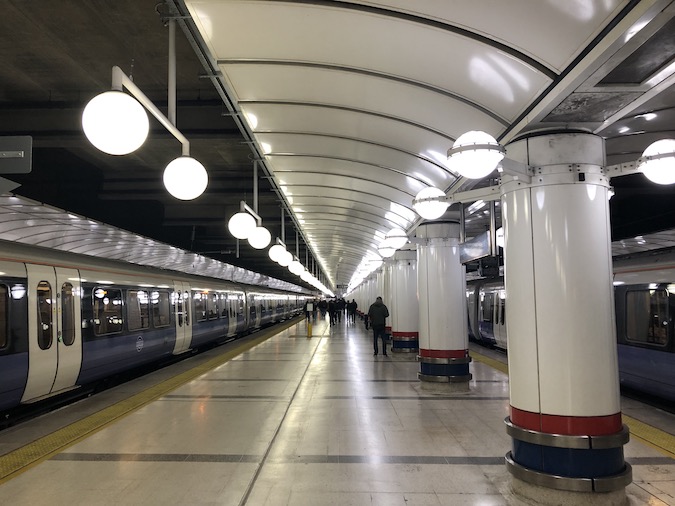 The entire Elizabeth Line, much of which has long been running under the name TfL Rail, connects Reading to the west of London and Heathrow with Shenfield to the east, though not all the journeys are continuous as the line is currently in three sections.

This means, for example, that until May 2023, passengers coming into Liverpool street from Essex on the new line must disembark, cross the main concourse and enter the spectacular new Elizabeth Line station in order to join the new central section and continue towards Paddington.

For the time being there are no services on Sunday and the line will close for three short periods later this year to update the complex software of a system described by Mark Wild, chief executive of the Crossrail company that built it as one of the world’s “most complex and biggest digital railways”.

At stations, Elizabeth Line staff greeted and directed passengers with the help of enormous foam hands, adding to a party atmosphere among train enthusiasts for a project that has been on the drawing board for decades. At Paddington, On London, met a staff member in the company of her parents, sister and baby niece as she posed for photos with individual travellers and groups.