If you’ve lived in London for any time at all, you’ll probably have some sense that not all Tubes are created equal. The Victoria line speeds you across town, covering the distance from Walthamstow to Brixton in what seems like the blink of an eye. The sub-surface lines, by contrast – basically, any of those that share tracks with the Circle – seem to take pride in stopping as frequently as possible, including in such obviously made-up places as West Brompton, Plaistow or Royal Oak.

But is any of this actually true? Or do I just think it because I grew up at the far end of the District line, just down the road from Vladivostok East but an annoying distance from anywhere one might actually describe as “London”?

I recently stumbled upon a dataset that might just tell me the answer. It’s from a few years back – 2006, to be precise – so we can’t be certain it’s still completely accurate. But it gives official estimates for the exact distances between any two adjacent stations on the network, as well as information on how long it takes to cover that distance at any time of day. From this we can work out how fast the trains on each route actually travel.

I’ve used the data for “inter peak runtime” (basically, between 10:00 hrs and 16:00 hrs each day), and averaged the speed of trains running in either direction. Also, with apologies to Chesham, I’ve stuck to journeys in Zone 1, in a transparent attempt to make my life easier. Sorry. Here are the results: 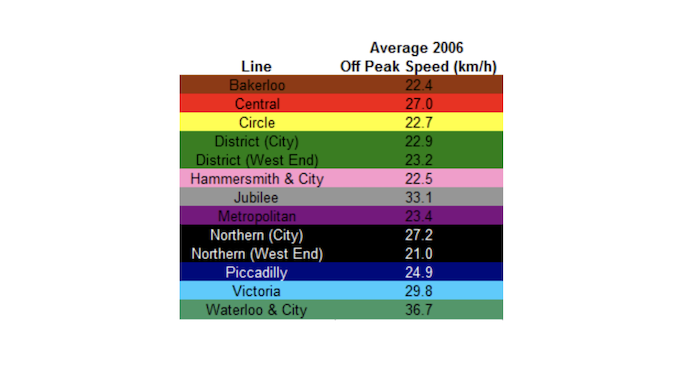 And, since that’s a bugger to read, here’s a bar chart: 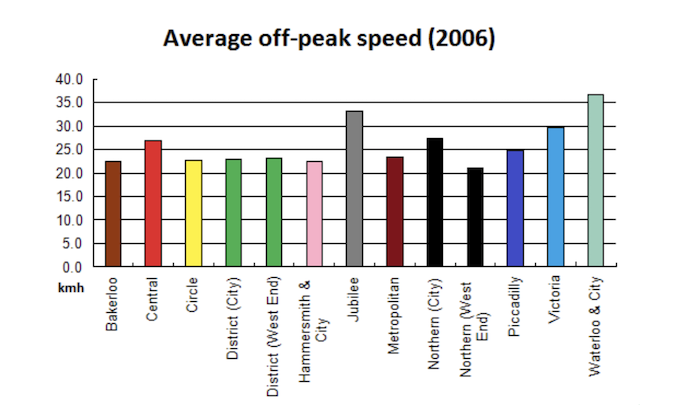 The first thing to note is that the sub-surface lines – yer Circles, yer Districts, yer Hammersmith & Cities, yer Mets – really are among the slowest on the network. Even slower, however, are those trains travelling the West End branch of the Northern line. Since exactly the same trains travel much faster on the City branch, my guess is that the problem here is the frequency of stations between Embankment and Camden Town, rather than any technical details of the train.

Secondly, the Victoria is not the fastest line on the network. It’s beaten by both the Jubilee, which is the newest and most recently extended line on the network, and by the Waterloo & City shuttle, which makes sense, since it runs for an unusually lengthy distance of 2.37 km without stopping.

Two other oddities are worth noting about this. The W&C takes 15 seconds longer on journeys towards Bank than on those towards Waterloo, a difference of nearly 7%. No idea.

The other is that, looking at “un-impeded running times” – that is, those without all those pesky passengers – Jubilee trains are much, much faster, travelling at over 42km/h.

Or at least, they were 15 years ago. And while 2006 may not feel that long ago to some of us, in objective reality, it definitely was. So have things changed?

I’ve not, alas, been able to find another, more recent dataset covering the same numbers. What I do have, though, is CityMapper, which will tell you how long a Tube journey between two stations in any particular line will actually take if you do it today. This method has two problems: lockdown means we can’t be sure journey times at present are entirely representative of more normal times; and the Waterloo & City line is not currently running, so I’ve no idea if its speed has changed since 2006. But it’s the only method I’ve got, so let’s have at it. By plugging the resulting numbers into the equations I used to generate the charts above, I got the following results. 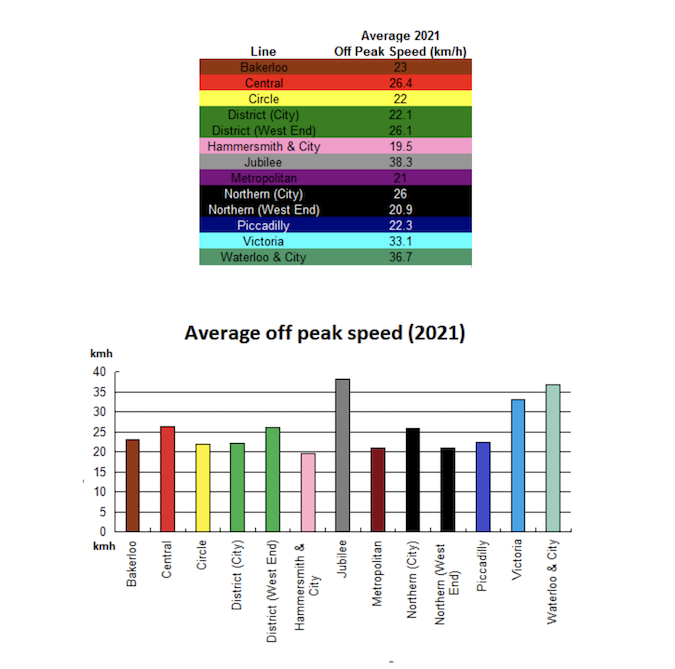 What’s changed? A few lines (the Bakerloo, Northern, Central, Circle and the main branch of the District) still run at speeds very similar to those they ran at in 2006. Except for the Bakerloo, they’re all very slightly slower; but the difference is negligible, so this may well be a rounding error resulting from the fact CityMapper only gives journey times in full minutes.

The other lines, though, have seen more dramatic changes in speed. The Metropolitan and Piccadilly lines have seen their speed drop by around 10%, and the Hammersmith & City by more than 13%. The extra three and a half minutes CityMapper suggests you need on the latter, at least, is well beyond rounding error territory.

At the other end of the scale, the Victoria line is around 11%, the West End branch of the District around 12%, and the Jubilee line nearly 16% faster than they were. Again, counting journey times in minutes rather than seconds could explain much of this – but the reduction in Jubilee line journey times between London Bridge and Baker Street from nearly 13 minutes to just 11 suggest at least some increase in speed. Whether this is just the reduction in passenger numbers enabling the line to get faster to its unimpeded journey time or something more is not currently clear.

At any rate, it is clear that the slowest line of the London Underground is the Hammersmith & City, while the fastest is, at very nearly twice the speed, is the Jubilee. Sorry, Victoria: you just aren’t that fast any more.

London.co.uk has been providing in-depth coverage of the UK capital’s politics, development and culture since February 2017. It depends greatly on donations from readers. Give £5 a month or £50 a year and you will receive the On London Extra Thursday email, which rounds up London news, views and information from a wide range of sources, plus special offers and free access to events. Click here to donate directly or contact davehillonlondon@gmail.com for bank account details. Thank you.