London was awash with political excitement yesterday. Most attention was on events in Westminster’s St James’s ward, where a resident of a publicly-owned flat has been given notice of eviction, but there were also interesting events in Camden and Hackney, where by-elections were held for seats where councillors elected on 5 May had decided to stand down after only a couple of weeks in office.

The Hampstead Town ward election in Camden resulted from a series of events that have already acquired legendary status locally. Despite Hampstead’s long association by reputation with the political left, Hampstead Town ward had never voted Labour and mostly been Conservative, although latterly the Liberal Democrats could win seats there in a good year.

Boundary changes in 2022 made the ward an even less likely Labour prospect. It lost its southern fringes lower down the hill, toward Belsize Park (in general, the further uphill one goes, the more exclusive and affluent Hampstead becomes). The excluded area contained a small council estate at Aspern Grove and housing for NHS workers at the Royal Free Hospital and therefore some of the best areas for Labour.

All parties divide wards into safe ones, where their candidates are highly likely to be elected whatever they do, marginal, where serious campaigning is called for, and hopeless, where the candidates are “paper” ones. But Camden’s swing towards Labour was so strong in May, that even on the new boundaries Hampstead Town split its favours, electing one Conservative and one Labour councillor.

The Labour winner, Adrian Cohen, had gone to bed rather than attend the count, but got up quickly when he saw a Camden New Journal report on Twitter – he had won. The fairy tale, though, was short-lived. A few weeks into his surprise term, Cohen stood down.  “I would like to thank the residents of Hampstead Town for electing me to be one of their two councillors representing the ward,” he said. “This historic victory for Labour was truly unexpected. Unfortunately my personal circumstances now mean I cannot take up the seat as a Hampstead Town councillor. I am deeply sorry that I cannot do justice to your support, but Hampstead Town deserves a Labour representative who can work every single day for our community.”

Campaigning was renewed in this distinctive ward. It covers the Hampstead side of the Heath from the West Heath down to South End Green, including some of the most desirable residential areas in the country. The even plusher area to the south and west is in Frognal ward, which remained Conservative. But Town is a beautiful and historic place, with past residents including John Keats, Michael Foot and no end of intellectuals, artists and actors – as well as more ordinary but wealthy citizens who enjoy life in this urban village. Labour-run Camden is, while not reviled, not regularly garlanded with praise by Hampstead’s active citizens either. There are always issues around planning, parking and traffic, and any call to preserve the area’s distinctive character against threats both well-defined and vague will fall upon receptive ears.

Labour’s candidate for the by-election, Alexandra Sufit stood alongside Cohen in May. She is director of diversity and inclusion for a music and tech firm and secretary of her local constituency Labour Party (those with experience of local politics will know that a constituency party secretary does a lot of the work).

The Conservative candidate was another Alex, Alexandria Andrews, who stood unsuccessfully in the new Primrose Hill ward in May. She stressed the local nature of the contest, telling the Journal well before Chris Pincher went out that fateful evening that “I heard time and again the message that the government needed to change, and that message was heard loud and clear in May. Now, Hampstead uniquely has a chance to elect another local champion to work with [fellow Conservative ward councillor] Stephen Stark, separate from national politics.”

However, national politics ended up playing a part. Early in the campaign Labour were distributing leaflets bearing Boris Johnson’s face, but in an act of daring and chutzpah Camden Tories put out a last-minute leaflet on polling day celebrating Johnson’s announcing his resignation with the message “it’s OK to vote Conservative again’”. 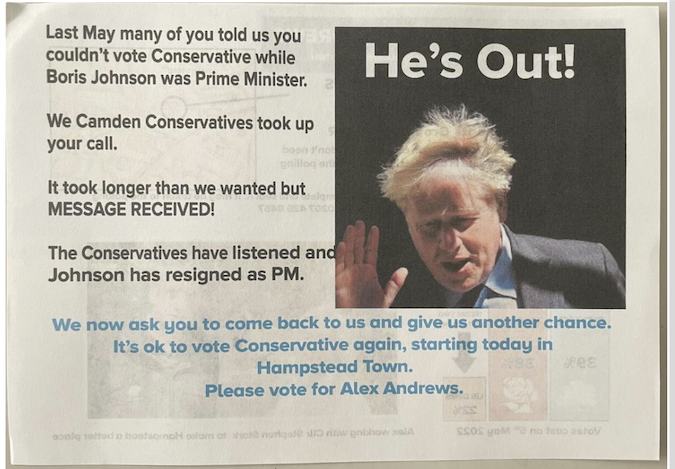 The Lib Dem candidate was Linda Chung, a well-known figure in Hampstead’s life who had previously represented Hampstead Town on the council from a 2008 by-election until 2014. There were six candidates in all. The other three were the green Party’s Peter McGinty, who stood in Haverstock two months ago, an Independent and someone from the far right National Housing Party.

The full borough elections were the optimal moment for Labour, with the attention of Hampstead’s wealthy but liberal majority concentrated on giving Johnson’s government a beating and the Lib Dems fully engaged in their target wards of Belsize and Fortune Green. But the context for the by-election was different, with Labour owing the electorate something of an apology for the quick return to the polls, the leafleting forces of Lib Dems across London available and the Tories having more of a chance of communicating a local message. However, both Chung and Andrews avoided indiscriminate Town Hall-bashing. Chung in particular promised to work with the council in pressing Hampstead’s interests.

Hampstead Town is the sort of place where turnout is reasonably high; the fall between the borough elections in May (43 per cent) and the by-election (38 per cent) was less than would have been normal. Chung (pictured) won in some style, returning to the Town Hall with 919 votes (41 per cent), well ahead of blue Alex (620) and red Alex (559). The Green (103 votes) and Independent (44) candidates did not do well, but they were streets ahead of the far-right candidate, who polled an abject single vote.

Yesterday’s other by-election was in De Beauvoir ward in Hackney, another highly distinctive urban community. On the map, it is nearly a regular rectangle, defined by Regent’s Canal, Southgate Road, Balls Pond Road and – other than a small area in the south east corner – Kingsland Road. The area was built as a villa suburb in the early to mid-19th Century, with wide streets and a gracious square at its heart, but it declined in the 1920s and by the 1950s parts were being demolished and replaced by newly built council estates.

However, De Beauvoir was one of the first places where the tide of development turned. A residents’ association was formed in 1966 and in 1971 the council declared De Beauvoir Town a conservation area. It has been a Low Traffic Neighbourhood for much longer than the term has existed; bollards closed many of its streets to through traffic in the 1970s and it is a sought-after place of quiet urban charm. Although it is part of Hackney, it has an Islington N1 postcode. The ward also includes the post-war estates of De Beauvoir New Town and some recent blocks of flats, particularly around the canal. Pronunciation of the area’s name varies, hence the name of the brewery founded there in 2011 being Beavertown. Brewing has subsequently moved northwards to a larger facility at Brimsdown.

The by-election arose from the resignation of Tom Dewey, became a councillor for the first time in May but was a well-known and experienced Labour activist. Unlike Hampstead Town, his election had been a virtual certainty and his departure has been attributed to “personal reasons“.

De Beauvoir voted Labour by a large majority in May, but it has sometimes been volatile. Between 1990 and 1994 it voted Lib Dem, Conservative in two by-elections and then Labour, although it remained marginal – the Tories won a seat there in 1998, which was generally not a good one for them. But this sort of neighbourhood has seen the Conservative vote wither in recent years and they did not bother contesting it in the full elections in May. Oliver Hall, their mayoral candidate in May was their by-election standard-bearer and polled only 4.5 per cent of the vote.

Wards like De Beauvoir, with its long association with a pleasant local environment and a population increasingly drawn from affluent, educated professionals – as was intended by the people who first drew up the plans for the area in the 1820s – are now happy hunting grounds for the Greens. Having elected a councillor in nearby Dalston, they targeted the ward and their candidate Tyrone Scott, an adviser to charities on climate change, waged a strong campaign mixing local and global themes.

But Hackney Labour also has a lot of activists and a reasonably popular council administration, and their candidate Joe Walker, who contested the Springfield ward in the north of the borough in May, was able to fight off the Green surge – but only just. Walker polled 758 votes (41.8 per cent), a whisker more than Scott who was only 27 behind with 731. The Lib Dems (Thrusie Maurseth-Cahill, 133 votes), Independent Network (Kelly Reid, 83 votes) the Conservative Hall (82 votes) and the Women’s Equality Party’s Kristal Bayliss (27 votes) also stood. Turnout was an unsurprisingly mediocre 27.6 per cent.

What can we glean from these two results? First, as was shown in Enfield in 2018, being a councillor involves onerous public service and parties should perhaps do more to make sure their candidates – even in apparently hopeless wards, if the tide is coming in – are aware of what it involves.

Third, they show how strong some inner urban communities, inhabited by much-maligned educated professionals and global citizens, can be. There is a fiercely protective local pride in these neighbourhoods.

Fourth, we saw just how much some London Conservatives had come to loathe Boris Johnson. Perhaps despite the failure of the party in both wards there’s some electoral hope for the Tories in their remaining inner urban enclaves now that that page has – probably – been turned.