There is keen competition in the outer London borough of Bromley this year, as a combination of ward boundary changes, gradual demographic trends and Labour opinion poll leads creates interesting possibilities. Are Croydon and Redbridge, Labour suburban boroughs which were formerly Conservative strongholds, showing what lies ahead?

Bromley is usually the safest Conservative borough in outer London, and the Tories won a big majority at the 2018 elections, with 50 councillors elected compared with just eight for Labour and two Independents. The borough has fallen from Tory control only in 1998, when Liberal Democrat strength peaked.

But Lib Dem support has declined precipitously since then, falling from 25 to 13 seats in 2002 and completely eliminated since 2014. Labour’s previous maximum strength came in the party’s peak year of 1971, when it elected 15 councillors. More recently its representation has grown modestly from a nadir of three in 2010. How far will the tide come in this year? Could this Tory fortress actually fall?

Bromley is a large borough, with several distinct types of neighbourhood within its borders. Labour’s existing council group comes from the north west around Crystal Palace and Penge. This is the most urban, metropolitan part of Bromley, much like the adjoining parts of Croydon and Lambeth. The most interesting wards are the next ones out, around Beckenham and Bromley town centre. These were once formidably Tory, but the party’s hold slipped a little in 2018. The same social changes – more private renters, more BAME voters – have been affecting these wards in turn.

Boundary changes have also created the Plaistow ward, north of Bromley town, just across the border from the Downham and Whitefoot estates in Lewisham. From 1925 until 1950 there was a wall, topped with broken glass, running along part of the borough boundary, erected in order to keep the working-class population of Downham out. Bromley’s Plaistow is still not to be confused with those in Newham, but it has certainly changed since those days. If Labour can win the eight seats allocated to the the Plaistow, Bromley Town and Beckenham Town & Copers Cope wards that would get them to 16, a record haul for the party. 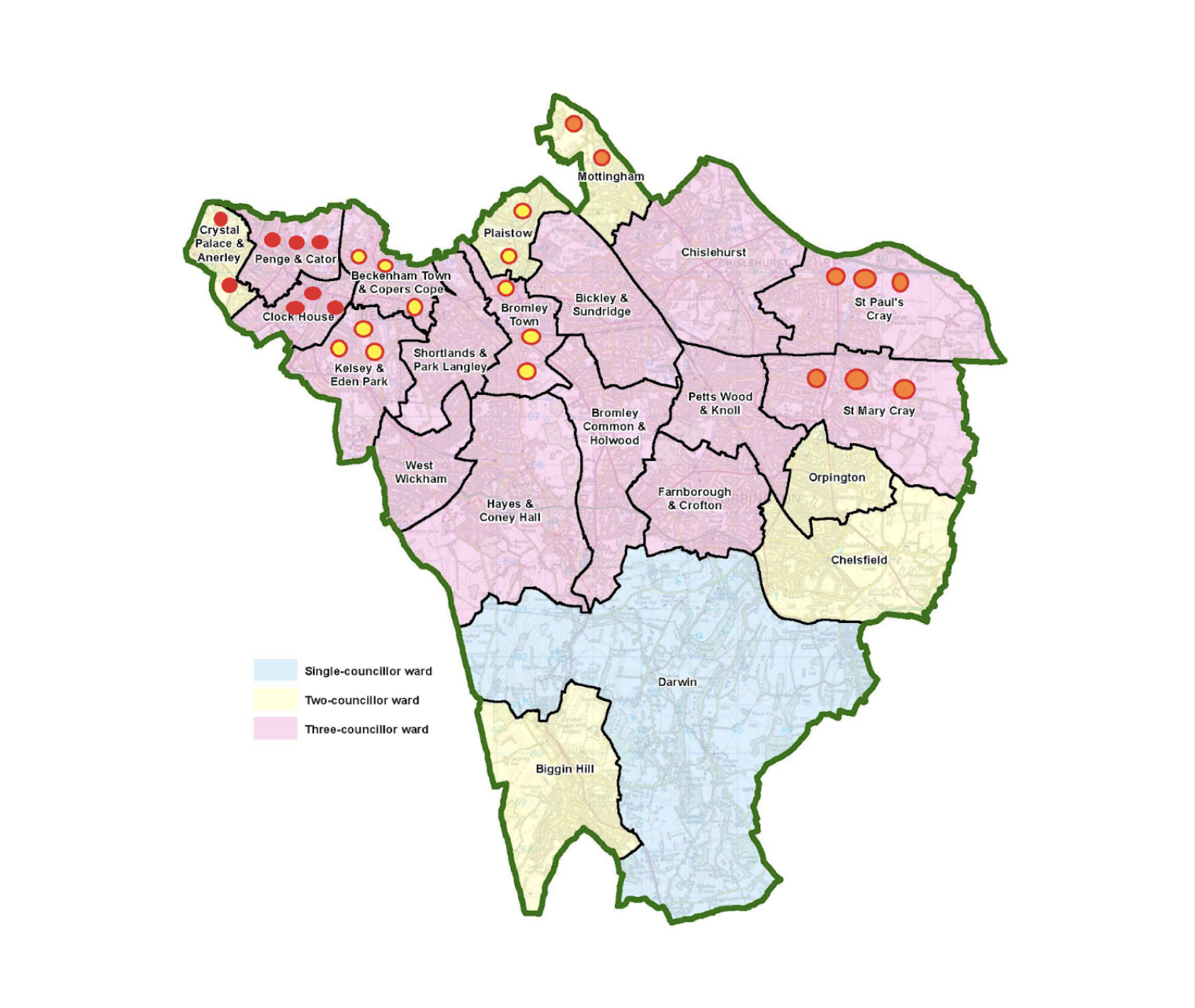 The next tranche to consider covers what was once the safest Labour component of Bromley – the large council-built estates of the St Paul’s Cray, St Mary Cray and Mottingham wards. These areas voted monolithically Labour in the 1970s and were the reason there was a Chislehurst constituency, which Labour won in 1966. But, as in outer London estates elsewhere – such as Harold Hill, New Addington and Hainault – Labour strength faded in the 2000s, with the Conservatives gaining Mottingham in 2002 and the Lib Dems having the upper hand in the Cray valley area until the Conservatives came through there too in 2010.

Voting in these areas remains volatile: UKIP won two seats in 2014 and in 2018 Labour revived a little, coming within 20 votes of a seat in Mottingham and 83  in Cray Valley East. The three wards to be contestd on 5 May have eight seats between them. If Labour won them as well as the other 16, they would have 24 seats on the council out of 58, leaving them needing just six more seats to form a majority. But this is where it starts to get really difficult for the party.

One of the wards they’d need to win is Kelsey & Eden Park, which one can generously consider a stretch target as the Conservatives finished 19 points ahead in 2018 and held a seat there with a slightly reduced majority in a December 2018 by-election. If Biggin Hill remained Independent, losing Kelsey & Eden Park would deprive the Conservatives of an overall majority on the council. But it is hard to see another ward where there is any potential at all for Labour to win. In West Wickham, for example, the Tories were 35 points ahead in 2018.

Although some areas of Bromley have shifted politically, there are still large tracts of the borough which are extremely Conservative – Chislehurst, Petts Wood, Shortlands – as well as the Orpington wards that the Lib Dems used to win. The Tories seem, therefore, seem to have 29 rock-solid seats, which means we can answer the question in this article’s title:

Further, it’s also pretty unlikely that we will see the maximal Labour result of 29 Conservatives, 27 Labour and two Independents. Absolutely everything has to go right for Labour to achieve this, and there are several obvious things with the potential to go wrong. Winning one of the three Kelsey & Eden Park seats is hard enough for them, but having a big enough lead to get all three is implausible.

The Mottingham and Cray wards are demographically the sorts of place where Labour did very badly in the 2019 general election and the 2021 local elections elsewhere, and where the party’s electoral problems are deep-rooted. They haven’t been strong in these since 1986. Winning eight out of eight would be a major reverse of the long-running trend.

Even in the areas where demographic determinism suggests Labour should win, it is complicated because the Lib Dems have also targeted these wards, and the Greens have some support in them too. In 2018 the Conservatives prevailed in Bromley Town, for instance, with 36 per cent of the vote against a badly splintered opposition.

But before we dismiss this analysis as a shaggy-dog story for the first day of April, there are some serious points to be made about electoral politics in Bromley.

It will be an interesting borough to watch when the election results come in, as long as you are not expecting the Tories to lose or even have a particularly close call. If they hold all their seats in the Cray Valley and in Mottingham, that may be an indicator that they are still in the ascendant in white working-class areas, which would be a good sign for them for the next general election. And if Labour pick off some seats around Beckenham and Bromley Town, it will confirm the creeping inevitability of demographic change and the accentuation of Labour’s support among professionals and commuters.

Looking forward, perhaps Labour can win Bromley. JL Partners’ February 2022 MRP model of voting indicated that Labour were two points ahead in the parliamentary seat of Bromley & Chislehurst and only two points behind in Beckenham. The Boundary Commission suggests moving the corner of Penge within Lewisham West & Penge back into the Beckenham seat, which would make it a genuine target marginal. Labour votes in places like West Wickham and Kelsey would become important.

Looking even further forward, Labour’s time in currently Tory suburbs may come in the next 20 years. If there is a Tory government in 2034 and it becomes unpopular, the red flag may fly over Bromley Civic Centre after all.