Skip to content
Transport for London figures for March, April and May show a slight divergence in demand trends for the two key public transport modes
Dave Hill

Transport for London has delightedly announced yesterday that more than a million passenger journeys were made on the newly-opened central section of the Elizabeth Line during the first six days of coming into service. But what has been happening on the Underground and bus networks as London’s emergence from the pandemic continues?

In early March On London reported the steady recoveries of riderships of both of those key public transport modes, as measured during the Monday morning peak travel period up until 10.00 am. Tube entries and exits had risen to 1.27 million on 28 February from not much above 900,00 on 10 January. Bus tap-ins had grown from 1.1 million to 1.26 million over the same period.

TfL has now kindly supplied figures for all the subsequent Mondays from 7 March up to and including 23 May. March, April and May have, of course, been punctuated by bank holidays and Easter, during which demand fell, as expected. Those Mondays are in italics in the table below. It is the other numbers that show the underlying trends. 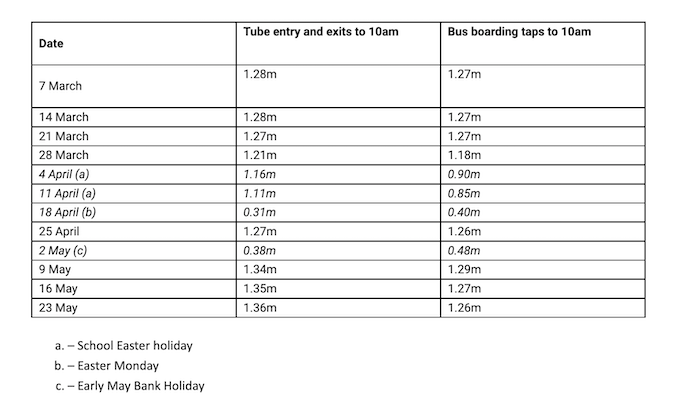 Those non-italic numbers tell their own stories: working day Monday morning use of the Underground has kept on inching up, whereas bus use seems to have levelled off at between 1.26 million and 1.29 million tap-ins since 25 April.

TfL also reports that passenger numbers on the Docklands Light Railway and London Overground were at 69 per cent of the “pre-pandemic baseline” at the close of the financial year 2012/22, while the figure for London Trams was 83 per cent.