Skip to content
Though founded in an idyllic location, it has lurid associations with violence and death
Victor Keegan

It has a good claim to being the first of central London’s iconic squares, though it hasn’t the audacity to say it is the most picturesque. And sitting, as it does, on top of a London Underground car park hardly enriches its mystique. But what Bloomsbury Square lacks in surface charm, it makes up for with history.

The square was founded in the early 1600s by Thomas Wriothesley, Earl of Southampton, the son of the Wriothesley to whom William Shakespeare dedicated many of his sonnets. He was also the father of Lady Rachel Russell, of whom more later.

A building called Southampton House occupied the northern end of today’s Bloomsbury Square. It was later renamed Bedford House after the Southamptons were joined in matrimony to the Bedford family, which still owns much of the neighbourhood’s land today. It was an idyllic spot at the time. To the west it was soon joined by the grandiose Montagu House, later dismantled to become the British Museum. Beyond those two aristocratic mansions was the end of London – all open fields as far as the eye could see (see image above).

Everard Maynwaring, a distinguished physician of the time, summed up its attractions as “the best air and finest prospect, being the highest ground…a fit place for nobility and gentry to reside”. Thomas Macaulay said that foreign princes “were taken to see the square as one of the wonders of England”. Even the often curmudgeonly essayist Augustus Hare observed: “It is one of the most sedate and beautiful outdoor attractions in the whole of London.”

Idyllic it may have been, but it was also a killing field. Like the area behind Montagu House, its remoteness made it a place for the gallants of the day to settle their debts of honour with pistols or swords at dawn. The most notorious occasion was on 9 April 9 1694, when the 23-year-old Scottish economist and financier John Law fought Edward “Beau” Wilson, killing him with the first thrust of his sword. Both men were smitten by Elizabeth Villiers, a society beauty and former mistress of King William. To adapt a later quip about Bloomsbury folk, they loved in triangles and duelled in squares – fatally.

Law was found guilty of murder and sentenced to death, but, to cut a long story short, escaped prison and went abroad, later becoming the Controller General of Finances for France – some say he was de facto Prime Minister – using new economic theories that were later endorsed by John Maynard Keynes. 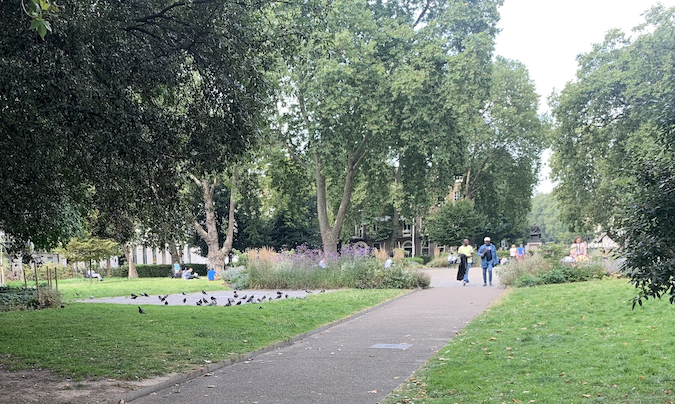 Bloomsbury Square had already been associated with death. In 1683, Lord William Russell, husband of Lady Rachel Russell (see above), was accused of treason for his alleged part in the Rye House plot to ambush Charles II and his brother – the future James II – in order to forestall a Catholic succession. Lady Rachel stood by her husband throughout the trial, at which Lord Russell was found guilty. He was beheaded in nearby Lincoln’s Inn Fields by the notoriously barbaric and incompetent executioner Jack Ketch. Lady Russell continued to live in Bloomsbury Square until she died, aged 87, in 1723, leaving voluminous letters providing insight into 17th century aristocratic life. Lord Russell was later granted a posthumous reprieve.

Prior to that, in 1642, Bloomsbury Square had experienced the whiff of warfare, when it was the site of one of the ring of forts around London constructed by Oliver Cromwell to protect against an expected invasion by Charles I’s army. That didn’t materialise. But the square was badly hit during the Gordon Riots of June 1780 – disturbances on a scale at least as damaging as the French Revolution nine years later. The house of Lord Mansfield, the Lord Chief Justice – on the side of the square where Victoria House is today – was one of the chief targets. The building was all but destroyed by the anti-Catholic rioters, including Mansfield’s precious library, though the Lord himself managed to escape by way of his back door.

There is an unexpected sequel to this story. Somehow, Mansfield became the presiding judge at the trial of the riots’ leader, Lord George Gordon. Mansfield weighed the pros and cons with such stereotypically English fairness that Gordon was acquitted of the charges against him, even though he had set in motion the chain of events which had led to Mansfield’s house being attacked.

Today, Bloomsbury Square suffers from having a main road to its south, a swanky Grecian art-deco creation to its east and that car park underneath, though it does also have a handsome John Nash-designed house at the north west corner attached to an early Nash terrace in which the celebrated architect once lived. There is a commanding statue of the remarkable Whig politician Charles Fox at the north end. His back is turned to the square itself, but we are free sit in the middle of it and contemplate its intriguing history.

This article is the fifth of 25 to be written by Vic Keegan about locations of historical interest in Holborn, Farringdon, Clerkenwell, Bloomsbury and St Giles, kindly supported by the Central District Alliance business improvement district, which serves those areas. On London’s policy on “supported content” can be read here.