If you stand in the middle of St John’s Square off Clerkenwell Road you will see part of a circle of cobblestones. They trace the position of the nave of the Priory Church built by the Order of St John and consecrated in 1185. The square was the northern precinct of a 19-acre priory site which reach as far as Smithfield before it was split asunder when Clerkenwell Road was bulldozed across it in the late 1870s.

The extent of the priory’s property can be seen from the Agas map above. It was bounded by today’s Turnmill Street and Cowcross Street, their names almost unchanged since medieval times, with the River Fleet (now covered over, shown in blue) flowing to the west. From its foundation in 1144 until the Dissolution of the Monasteries it was the English headquarters of an international military order – also known as the Knights Hospitaller – which conveyed knights, monks and money to a pilgrim hospital in Jerusalem, all under the ultimate guidance of the Pope. The St John Ambulance charity is descended from it.

The nave no longer exists – hence the cobblestones. But next door to where it used to be survives one of the oldest crypts in London, perhaps the very oldest, dating back to the 1140s. It is beautiful, in almost pristine condition and open to the public on certain days (photo below).

There is a small stained glass window in the crypt depicting a youthful Robert Hales, a former Grand Prior of the Priory of St John. This would not be worthy of mention except that Hales had another day job: he was the Treasurer of England under King Richard II. In that position he did something whose consequences still reverberate: he was responsible for collecting the poll tax which sparked the Peasants’ Revolt of 1381. 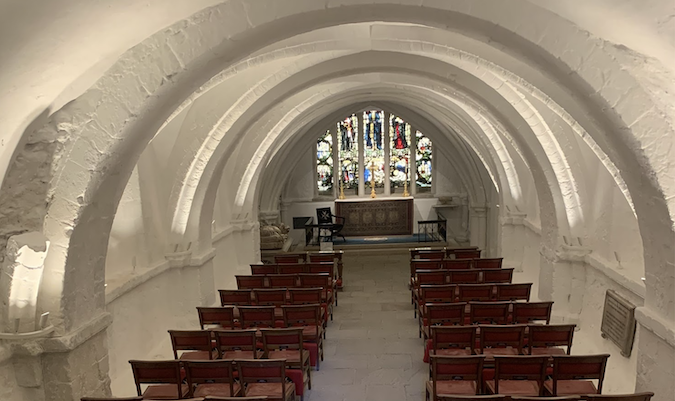 If ever there was an example of political chickens coming home to roost it was this. The poll tax, which everyone had to pay irrespective of income, sparked an insurrection, as would another one introduced centuries later by Margaret Thatcher’s government. There were multiple other grievances, such as the tenant farmer state of “villeinage” – effectively serfdom – under the lords of manors, whose actions  peasants lacked any legal or political right to challenge.

The revolt was led by Wat Tyler’s army of peasants, mainly from Kent. They were inspired by the radical preacher John Ball, whose iconic slogan “when Adam delved and Eve span, who was then the gentleman?” was the poetic inspiration behind the uprising. The rebels stormed the Clerkenwell priory, inflicting enormous destruction which wasn’t fully repaired until over a century later under Thomas Docwra, who as Lord Prior from 1501 to 1527, also oversaw the construction of St John’s Gate.

The fate of the rebels has been well documented. Representatives of the king met them at Blackheath, but failed to persuade them to return home. With most of the royal forces otherwise engaged abroad or – like Richard’s uncle John of Gaunt – in the north of England, Richard, then only 14 years-old, retreated to the safety of the Tower of London. On 13 June 1381, swollen by local support, the rebels attacked the gaols and destroyed the hated Gaunt’s Savoy Palace in the Strand

The following day, 14 June, Richard met the rebels in person at Mile End and conceded all their demands, including the abolition of serfdom. But in the meantime, others stormed the Tower, killing several dignitaries including Hales, who was beheaded. On 15 June Richard met Tyler himself and his supporters, this time at Smithfield, only a few hundred yards from the Priory. William Walworth, Mayor of London, killed Tyler, but Richard, after again pledging reform, persuaded the rebels to disperse. He later reneged on his promises and took lethal revenge on the rebels, who had very nearly brought about a revolution.

The Priory survived the peasants but not Henry VIII 150 years later. In 1540, under the dissolution, all the wealth and properties of the Order of St John were transferred to the Crown and used for keeping the king’s tents and hunting equipment. It was the final religious order to be disbanded by the king. Henry later gave the Priory to his daughter Mary – the so-called “Bloody Mary” – who, as queen and a Catholic, briefly restored the order in 1557. But when her Protestant sister Elizabeth came to the throne, it was again dissolved.

Worse was to come. Henry’s son Edward VI was crowned in 1547. As he was only nine-years-old England was effectively ruled by the rapacious Edward Seymour, 1st Duke of Somerset, also known as the Protector. He pillaged the Priory, pulling down the church and its mighty bell tower and using the bricks to build his extravagant palace, Somerset House in the Strand. But Nemesis was waiting in the wings. Somerset died before his Xanadu was completed. He was executed for treason on Tower Hill and is buried in the church of St Peter ad Vincula within the Tower.

Almost all traces of the Priory have disappeared apart from the crypt, the gate and a reproduction of the church which stands today on the same footprint as the original, to the side of the square. From its herb garden you can see bits of medieval bricks and tiles embedded in its wall. But St John Ambulance is still based at St John’s Gate and despite Clerkenwell Road running through the middle of the original site it is still possible to imagine what it was like when knights gathered here to celebrate the start of their long and ultimately fruitless journeys as crusaders to the Holy Land.

This article is the eleventh of 25 being written by Vic Keegan about locations of historical interest in Holborn, Farringdon, Clerkenwell, Bloomsbury and St Giles, kindly supported by the Central District Alliance business improvement district, which serves those areas. On London’s policy on “supported content” can be read here.

Tower Hamlets: Like it or not, Lutfur Rahman is a popular politician. But what kind of Mayor will he be?