Skip to content
It was disreputable, defiant and very popular, and who knows what remains of it below ground?
Victor Keegan

If you stroll along St John Street in Clerkenwell near its junction with Aylesbury Street, there is an archway that leads to an alley called Hayward’s Place. Tread nostalgically, for this is the site of the Red Bull theatre that flourished, not without controversy, from the reign of James I in 1606 throughout the Civil War and its aftermath, a period which saw the complete closure of most of other London theatres until the Restoration in 1660. A recently-installed plaque high up on a wall reminds passers-by of the Red Bull’s hidden history. The arch may well be where the original entrance to the theatre was.

We have been living through an extraordinary period of archaeological discovery, which has seen the buried remains of Shakespearean theatres such as the Rose Playhouse on Bankside and the Curtain in Shoreditch revealed. But no one has yet got round to unearthing the Red Bull. That is largely because it has been completely built over, but also because it was never considered to be in the same league as the others – its performances and its audiences were thought too rumbustious and even vulgar.

The Red Bull’s reputation may have had something to do with being situated along St John Street, where cattle were driven to Smithfield market through an area as famous for its brothels and prisons as its religious houses. Its reputation is in the process of reappraisal though, thanks mainly to research by Dr Eva Griffith, whose book, A Jacobean Company and its Playhouse, argues convincingly that the theatre’s low status was during its later period, following ten years of being the home of Queen Anne of Denmark’s Men, a parallel group to Shakespeare’s troupe The Kings’ Men. Anne was the wife of James I, and therefore unlikely to have lent her name to anything too unsavoury.

Griffith also claims that the Red Bull had a larger capacity than the famous Globe theatre, which could hold nearly 3,000 spectators. It was a converted inn yard in the open air rather than a purpose-built theatre like the Globe or the Rose. Anne’s men also performed for a while at the new indoor Cockpit theatre in Drury Lane, which opened in 1616, though with mixed results. 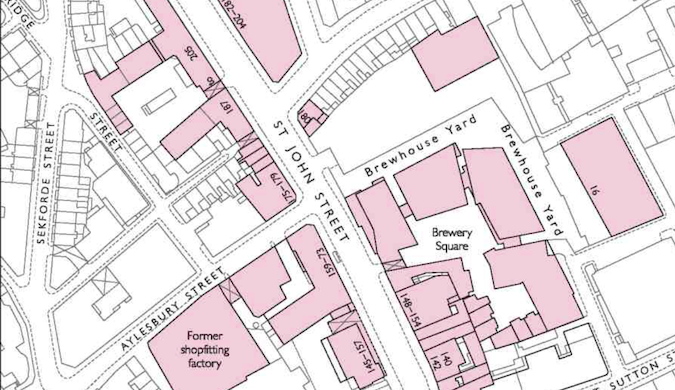 Shakespeare didn’t write for the Red Bull, but many of his still-esteemed contemporaries did, including Thomas Heywood, John Webster and Thomas Dekker, and it is clear that his plays were performed there, because history records that in 1627 this was ordered to cease.

With the monarchy back on the throne, the theatre reverted to putting on crowd-pleasers such as William Rowley’s All’s Lost by Lust. Samuel Pepys observed (in March 1661) that it was “poorly done, with…much disorder”. Things got even worse when the Red Bull started staging prize fights and fencing in a forlorn attempt to woo punters back. It petered out in the mid-1660s, outliving the Globe and the Rose, but only by morphing into a parody of its former self.

Are there any remains waiting to be dug up? Heather Knight, a senior archaeologist at the Museum of London, who has been heavily involved in the excavation of other theatres, thinks the Red Bull site is interesting. The buildings now on it are, she says, 18th or early 19th century: “It is possible remains exist beneath them, but it also depends on how the Red Bull ended its life. Was it demolished to ground level or was it re-used in a later building?”

Some Elizabethan and Jacobean playhouses have been lost without trace, such as the biggest of them all, the Swan by Blackfriars Bridge. That is because office blocks with deep foundations were built on top of them at a time before regulations required archaeological surveys to take place after old buildings were demolished. There are no plans for an office block on the site of the Red Bull theatre, but, who knows, maybe it would make a tempting investment for a drinks company of the same name.

This article is the first of 25 to be written by Vic Keegan about locations of historical interest in Holborn, Farringdon, Clerkenwell, Bloomsbury and St Giles, kindly supported by the Central District Alliance business improvement district, which serves those areas. On London‘s policy on “supported content” can be read here.