Skip to content
An illustrious inn since the 14th century, it was destroyed in the 19th, but not before making its mark on the capital's history
Victor Keegan

In 1873, a building on Ludgate Hill was demolished in order to erect a railway viaduct which obscured a historic view of St Paul’s Cathedral. It was described by Historical Eye as “one of the most serious disfigurements in the City of London”. Walter Thornbury, in his Old and New London, was even less flattering: “Of all the eyesores of modern London, surely the most hideous is the Ludgate Hill Viaduct – that enormous flat iron that lies across the chest of Ludgate Hill like a bar of metal on the breast of a wretch in a torture-chamber”.

The building that was destroyed was La Belle Sauvage (main picture), one of the most iconic of London’s medieval inns, which had served the capital’s changing tastes since the 14th century. The main business of the inn, which has also been known as the Bell Savage and various other similar names, was serving the coach travel trade, providing 40 rooms and facilities for 100 horses. But it was also one of four taverns licensed by the City of London, including during Shakespeare’s time, as a venue for plays. Love’s Labour Lost was once performed there and Queen Elizabeth I’s players, with their famed ad-lib clown Richard Tarlton, had a residency.

The other licensed inns at that time were the Bull, which, like La Belle Sauvage, staged its plays outside in its courtyard, while the Cross Keys and the Bell were indoor venues. All were closed in 1594 by the Privy Council, urged on by the Lord Mayor, paving the way for the later success of more famous theatres – such as the Globe and the Rose – in Southwark, outside the constraints of the Puritan-run City.

The theatres were not just for watching plays, as a contemporary account by Stephen Gosson notes: “In the playhouses at London, it is the fashion of youths to go first into the yard, and to carry their eye through every gallery, then like ravens…thither they fly, and press as near to the fairest as they can…and either bring them home to their houses on small acquaintance, or slip into taverns when the plays are done.” We get the message.

The inn hosted other activities too. It was in La Belle Sauvage around 1672 that Britain’s greatest wood sculptor Grinling Gibbons had his workshop. Apparently, a sculpted vase of wooden flowers there was so delicate that passing carriages caused it to flutter in the wind. And it was there that Pocahontas, the American Indian princess brought to England by the Virginia Company of London, stayed during her triumphant visit in 1616-1617.

It was also at La Belle Sauvage that a revolt led by Sir Thomas Wyatt to oust the Catholic Queen Mary in 1554 came to a grinding halt when the entrance to the City at nearby Ludgate was closed to him and his rebel army, leaving him, according to one account, to “rest awhile upon a stall over against La Bell Savage gate”. Soon after, he surrendered at Temple Bar and was later executed.

From 1851, the then-expanding publishing company of John Cassell had office space there. A descendant of that firm, Cassell & Company Ltd, would later be based at Red Lion Square, where it erected a statue of Pocahontas as a reminder of the connection to La Belle Sauvage. It has been argued that the inn was named after her, but it is probably linked to an early proprietor called William Savage or his wife Iso(bel) Savage.

La Belle Sauvage was near the foot of Ludgate Hill, which was not ideal as it backed on to the notorious Fleet prison in Fleet Street from which debtors begged for food and money through openings in the walls. Ludgate was a principal entrance gate to London, and the main road from the City of London to the administrative centre, Westminster, went through it. 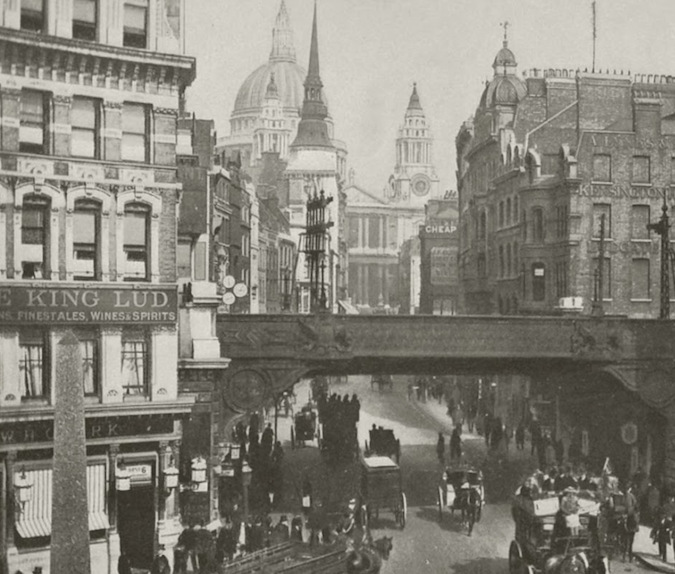 The gate itself was demolished in 1760 in order to widen the road and has been lost without trace, but statues of King Lud and his sons, which used to grace the gate, have longevity on their side. They were removed from Ludgate when it was dismantled, along with a statue of Queen Elizabeth. All can be viewed to this day outside the church of St Dunstan-in-the-West in Fleet Street. The statue of Elizabeth is the only contemporary one currently on public display in London.

That “hideous” viaduct (pictured above) which caused the destruction of La Belle Sauvage is itself long gone and the railway has been re-routed underground. The statues are all that remain of the lost gateway to Ludgate Hill. We should be thankful for small memories.