If you are going to write about London’s most charismatic criminal of the early 18th century, where better to start than the Rummer Tavern and brothel shown in the William Hogarth engraving above, just off Trafalgar Square. It was there, in 1722, that Jack Sheppard committed his first offence – stealing a couple of silver spoons a short distance from where he is buried at the nearby church of St Martin-in-the-Fields.

A criminal buried in a fashionable church? Yes. Sheppard was no ordinary villain. He was a small man – only 5 feet 4 inches tall – and also small-ish in terms of the crimes he committed. But for a fairly minor crook from Spitalfields, who died in 1724 at the age of 23, he left an enormous vapour trail.

Sheppard achieved widespread fame by escaping from prison four times, including twice from Newgate, the most notorious high security penitentiary of them all. He became such a celebrity that Newgate gaolers charged high society visitors four shillings to see him, and the King’s painter James Thornhill did a portrait of him.

It has been estimated that 200,000 onlookers filled the streets to watch the carriage that took Sheppard from Newgate along Holborn, stopping for the customary “one for the road” at a tavern on Oxford Street, to his execution at Tyburn. If that figure is correct it was something like a third of London’s population at the time. Several prominent people had sent a petition to King George I begging for the death sentence to be reduced to transportation, but to no effect. Sheppard could have received a lesser sentence if he had grassed on associates, but refused to do so.

Representations of Sheppard featured in many subsequent London plays, and in 1859 the Lord Chamberlain banned them all. William Thackeray, who didn’t like Ainsworth’s novel, reported an early example of what can only be described as merchandise branding. Vendors sold “Jack Sheppard bags”, filled with burglary tools, in the lobbies of the theatres and, Thackeray wrote, “one or two young gentlemen have already confessed how much they were indebted to Jack Sheppard who gave them ideas of pocket-picking and thieving [which] they never would have had but for the play”.

Given all this, it is a great shame that Hogarth’s picture does not depict Sheppard, although it does include a prostitute spilling urine over an inebriated freemason, a character based on a real life head of lodge who was also a judge known for his severe sentencing. The mason is being seen home by his “tyler” or gatekeeper while rough sleepers crouch under the window of a barber surgeon viciously extracting teeth. 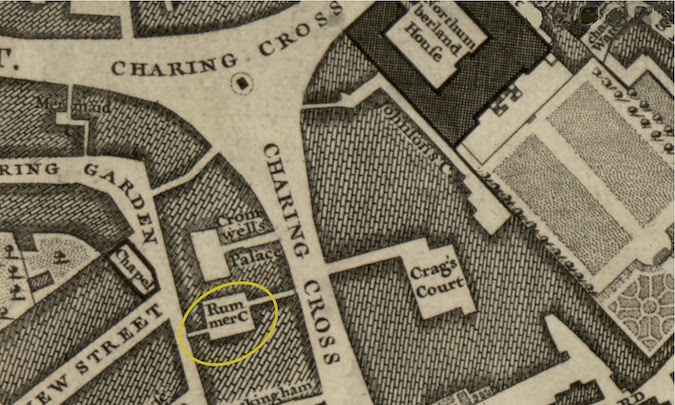 The location of the Rummer Tavern can easily be located from old maps and from the painting itself. In the background is a statue of Charles I, which was erected by his son Charles II. It still stands in the same spot in Trafalgar Square as it did then. Charles I and Sheppard had one thing in common – both received their death sentences after being tried in Westminster Hall, not far down the road from the Rummer.

There is a footnote. Sheppard’s ultimate great escape was thwarted. Friends had planned to seize his body from the Tyburn gallows after it had hung for the required 15 minutes and take it to a doctor to be revived. They failed because of onlookers surging forward. His remains were buried in the churchyard of St Martin-in-the-Fields that same evening. So long Jack Sheppard.