Skip to content
Little is known about the house where the great engineer lived, worked and died
Victor Keegan

For someone who died over 150 years ago, Isambard Kingdom Brunel has left an astonishing legacy of structures that are still intact. They include the SS Great Britain (on show at Bristol), the Great Western Railway, albeit on a changed gauge, the Clifton Suspension Bridge and, in London, the world’s first underwater tunnel at Rotherhithe (now part of the London Overground) and key parts of Hungerford Bridge. And they are just some of the best known.

What we don’t know so much about is the house where he lived for much of his life and where he died or even what it looked like. It has long since been pulled down, and no paintings, engravings or photographs of it have been found.

I was mildly surprised when I first read that he resided at and often worked from 18 Duke Street, which is today’s Horse Guards Road at the eastern end of St James’s Park. Given that in 1848 he also purchased number 17 next door, he would have occupied a large portion of the buildings at the corner of King Charles Street running towards Birdcage Walk (see main image). He wouldn’t have needed a garden as he had St James’s Park at his front door.

The house, close to where the notorious Judge Jeffreys lived almost 200 years earlier, was pulled down at the end of the 19th century to build what became Her Majesty’s Treasury. The nearest thing we have to knowing what the house looked like is a painting by Lady Carthy depicting his office (below) believed to have been done during the 1840s. 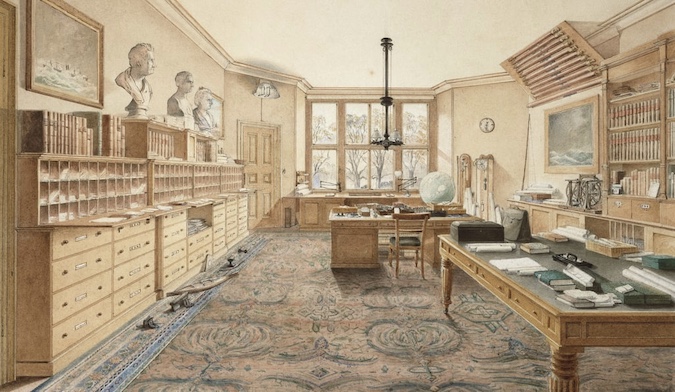 Through the window in the painting you can see what look like plane trees in St James’s Park, which are similar to those in front of the Treasury today. It would have been in this room that Brunel designed much of the Great Eastern, launched in 1858. It was the biggest ship in the world at the time, and retained that status for 40 years.

It is less well known that Brunel was not only a formidable engineer but also a connoisseur of art. Over a period of several years he commissioned and oversaw a series of 10 paintings by leading artists such as Edwin Landseer, reflecting scenes from Shakespeare’s plays. Nine of them were hung in his commodious dining room in Duke Street, which he used for entertaining. It came to be known as the Shakespeare Room, continuing a fascinating revival of Shakespeare paintings in that part of London.

At one stage it looked as though Brunel might leave these artistic works to the nation, but it was not to be. They were all sold. A few are still in Britain, including at the Leicester art gallery and the Royal Shakespeare Theatre in Stratford-upon-Avon, but, more’s the pity, most of the others have gone abroad or come under the category “present whereabouts unknown”. 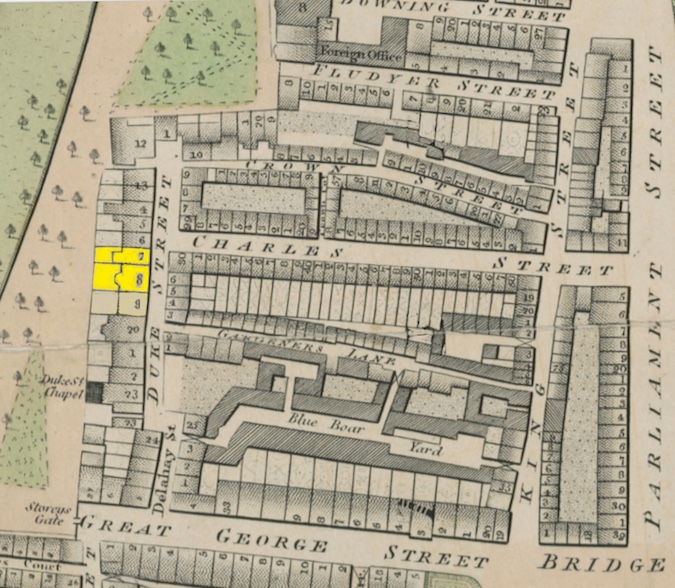 Numbers 7 and 8 Duke Street, highlighted in yellow in the map above, were actually 17 and 18 in the notation of the time. Charles Street is today’s King Charles Street, which has the controversial statue of Robert Clive at one end of it. The whole of the block south of Charles Street to Great George Street is now occupied by Treasury. St James’s Park is on the left.