Anyone who has lived in Victoria for a long time remains nostalgic for the Army and Navy Stores on Victoria Street. Many still use the name when referring to the building where the flagship branch was most recently based, even though it was rebranded in 2005 as an outlet of House of Fraser, which took over the company in 1973.

Now the building itself is to be demolished and replaced by a 14-storey office block, so take a good look at the photo of it above. Built in 1977, it was never likely to win an architecture prize but it seems absolutely pointless to pull it down. And it serves as a reminder of the curious history of the piece of the street on which it stands.

Army and Navy Stores (A&N) started life in 1871 as a cooperative venture, selling a variety of goods to officers and others in the army and navy at competitive prices and much loved by its customers, not least certain characters in Agatha Christie novels. It started off as a grocery shop before branching out into surplus clothing, drapery, fancy goods, pharmacy, wine and banking. It even had a guns department. Many of its goods were manufactured in local factories and workshops.

In 1878 A&N reduced its prices across the board due to the unexpectedly large profits it was making. As its clientele widened, competing retailers complained and successfully called for a House of Commons select committee to examine allegations of unfair competition, but MPs concluded there was no evidence to merit its closure. A&N expanded at home and abroad, following the tracks of the Empire to ready-made base loads of military customers. It was one of the great success stories of its age.

Its image was established by the look of its original home on the same part of Victoria Street, the palatial premises shown below. As a longtime resident of the area, I was surprised to learn that the company didn’t build its iconic base itself. In fact, it simply leased part of what was actually the large distillery of Joseph and John Vickers & Co, though as A&N expanded it soon bought up the whole of it. 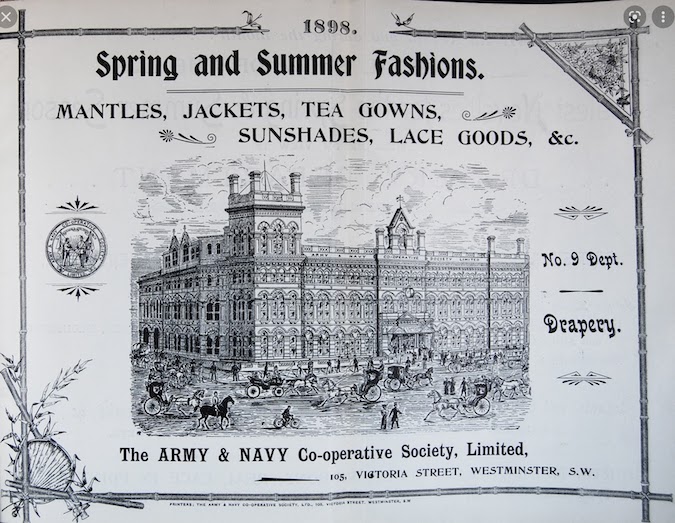 There is a deeper history too. The distillery was built in an unusual part of London known as Palmer’s Village after local vicar and benefactor James Palmer, who donated the site to raise money for his almshouses. Palmer Street is named after him. The village, recreated Merrie England, complete with a wayside inn – the Prince of Orange – and a village green with a maypole.

It appears to have been an oasis of relative calm in an environment notorious for destitution and criminality, being barely a hundred yards from the start of what Charles Dickens popularised as the Devil’s Acre. To the south and west were the swamps of Tothill Fields – remembered by Tothill Street nearby – where thieves and duellists hung out. Palmer’s Village must have seemed like the last outpost of civilisation before south west London petered out.