This needs an act of the imagination. If you stand in front of Westminster Council’s City Hall in Victoria Street and look across the road at the House of Fraser store (formerly The Army and Navy) you will be seeing what used to be called Palmer’s Village, a two-acre survival of Merrie England.

No one has described it better than Charles Manby Smith, who chronicled the rise and decline of Palmer’s Village with aching nostalgia. To the north of the Village, towards Westminster Abbey, was a conglomeration of the most squalid buildings in London, where the police feared to tread. To the south and west was the wild and swampy terrain of Tothill Fields, stretching down to the Thames. Manby Smith wrote of “the great Babylon, where, though hemmed in all around by crowded streets, dark narrow lanes and fetid courts, it (Palmer’s Village) yet retained many of the rural charms of its primal condition. It had yet a village green…and on the green, every first of May, up rose, reared by invisible hands in the night, the village May-pole, round which we have seen the lads and lasses dancing to the music of their own laughter.”

He added: “It had an old-fashioned way-side inn, the Prince of Orange; well we remember it, and its merry-faced and active little landlord, Wiggins, who never would be, still, and never could be sad, but with a perennial laugh on his lips and a joke on his tongue, welcomed the weary traveller to cheap and wholesome refreshment. Then there was Mrs. Wiggins who lived in the bar, and of whom nobody ever saw more than the head and shoulders”. 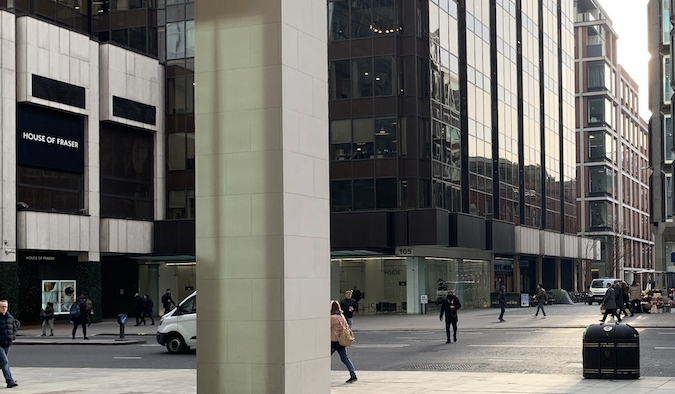 Palmer’s Village was demolished as recently as the late 1840s as part of the Westminster “improvement” scheme which gave us today’s Victoria Street. However, decline had already set in according to Manby Smith, who blamed it on the horse-drawn cab, the owners of which made bad use of open spaces in the village with stables being erected and flowers replaced by dung heaps. And with the cabbies, he says, came “late hours and midnight riot, gin-drinking and squabbling.”

Existing buildings were acquired by compulsory purchase orders and the new Victoria Street was built as much as seven feet above existing ground levels to improve drainage and use up the huge amount of rubbish left after demolition. When you walk along Victoria Street you are treading on submerged history. In keeping with the spirit of the time, no provision was made to re-house those displaced by the “improvements”, so progress led to a worsening of poverty.

Palmers Village was set up in 1654 by the Reverend James Palmer, Vicar of St Bride’s in Fleet Street, in order to finance almshouses for 12 poor people and a school for 20 boys he had built at the side of St Margaret’s burial-ground in Christchurch Gardens (next door to today’s Albert pub). It was called the Black-Coat School which eventually morphed into today’s Westminster City (comprehensive) School. Palmer’s name is kept alive by Palmer Street, which runs along the line of the old almshouses from Victoria Street next to the Albert pub to Caxton Street.

Those almshouses are long since demolished, the outside walls of properties of the Westminster Almshouse Foundation in Rochester Row have busts of Palmer and another benefactor, Emery Hill preserved from the original housing. Hill’s name too is remembered in a road name, the adjoining Emery Hill Street. Both men are commemorated with plaques in St Margaret’s church, next to Westminster Abbey.