Hundreds of years ago, the western side of Parliament Square, where the Supreme Court and the statue of Abraham Lincoln stand today, was known as Greene’s Alley. That was because the Greene family,  from which many offspring came, ran two pubs and a small brewery along the alley close to Westminster Abbey’s own brewhouse in Dean’s Yard. From these small beginnings can be traced the growth of what became the biggest brewery group in the country – the Watney Mann empire.

The Greenes had been in the industry since at least 1420 when Thomas Greene became Master of the Brewers’ Company. But business growth began in earnest around 1607, when descendants of Thomas started to move their activities from the Abbey precincts and set up at what became known as the Stag Brewery in Pimlico.

The brewery belonged to the Greene family until 1787 and it didn’t do badly – in 1722 it was described as being “the finest Brewhouse in Europe”. Expansion gathered pace and in 1837 when James Watney, a miller, bought a quarter share and became a partner along with John Lettsom Elliot.

For a while the premises were known as those of the Elliot Watney and Company (see map below). The entrance was at the end of Castle Lane, which used to be called Cabbage Lane and had two alleys running off it: Powder Beef Court and Mustard Alley, presumably to enhance the cabbage. The site, part of which is shown in the photo above, was opposite today’s Victoria Palace theatre, where a branch of Marks and Spencer currently takes up part of the space. 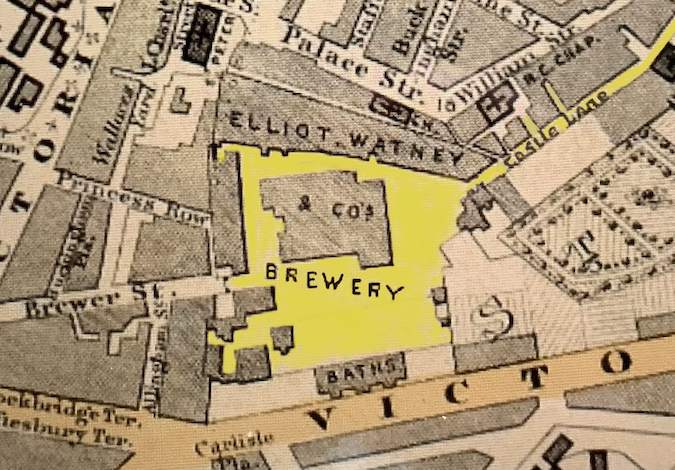 By 1858 the brewery was under Watney’s control, and he led a trend for gobbling up competition through mergers and takeovers. The fusion of Watney with Combe and Co of Long Acre and Reid’s stout of Clerkenwell into Watney, Combe & Reid is reckoned to have been the first big merger in the history of British brewing. In 1958 came an even bigger union when Watney merged with Mann, Crossman & Paulin to form Watney Mann. The Stag brewery lasted until 1959, well within the memory of many local residents, but was deemed too small for the enlarged company’s needs and closed down.

Watney achieved considerable success with its alliterative slogan “What we want is Watney’s” but ran into trouble when the emerging Campaign for Real Ale went for it and other big brewers in a big way, with sustained criticism of its huge promotion of the Red Barrel keg beer.

Nothing remains of the brewery building, though its name became attached to a brewery in Mortlake. An old photo (below) shows the site of the Stag Tap pub in Castle Lane, which was used by brewery employees and Westminster Archives has produced photographic memories of what it was like to work there (the buildings to the rear of the brewery in the picture, including the Westminster Chapel, are still functioning. 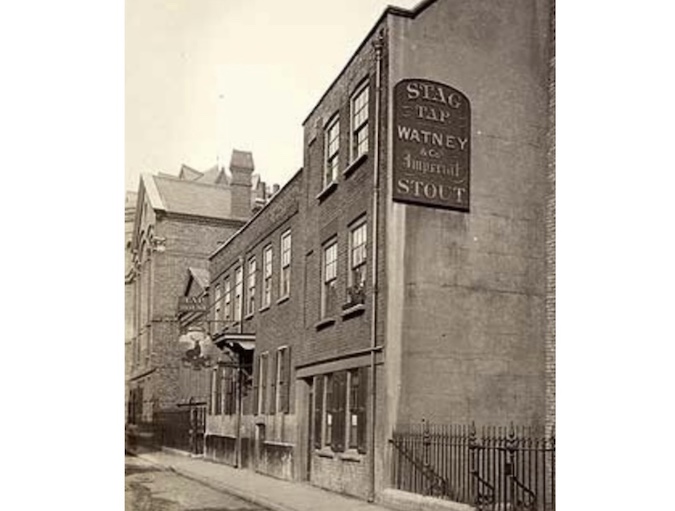 The only structure surviving from the earlier Greene era is the beautiful Wren-like Bluecoat school in Brewers Green, SW1, which was built in 1709 by William Greene, partly to educate the children of employees. The whole of the location’s name may refer to the endeavours of the Greene family, from whose name the final “e” was often dropped. It is believed that barrels were sometimes stored in the cellar there.

Whether the Watney company would have fared even better had it returned to its roots and called Red Barrel “Green Barrel” instead can only be guessed at, but at least Brewers Green and the Bluecoat school serve as small reminders of where it all began.

Main photo: Brewery History Society. All previous instalments of Vic Keegan’s Lost London can be found here and a book containing many of them can be bought here. Follow Vic on Twitter.