Lincoln’s Inn Fields is the biggest garden square in London. It was long said that Inigo Jones, who designed it in the 1630s, had planned it to have the same dimensions as the Great Pyramid of Giza in Egypt. You don’t have to believe that to be impressed by not only its size but also the fact that it has resisted all attempts to build on its considerable vacant space, apart from a restaurant and some tennis courts.

During Charles II’s reign (1660-1685) there were moves to have an Academy of Painting dominating the centre of the square. Christopher Wren drew up plans for a church near the same spot. Later, in 1842, Sir Charles Barry, architect of the Houses of Parliament, designed a “magnificent structure” for new law courts to occupy the centre of the fields, including a great central hall surrounded by 12 courtrooms.

Mercifully, all of that was resisted. What has changed is the type of people who occupy the square and the buildings around it. Its early character was succinctly summed up by the novelist Walter Besant when he wrote: “The history of Lincoln’s Inn Fields is a curious combination of rascality and of aristocracy. The rascals infested the fields, which were filled with wrestlers, rogues and cheats, pick-pockets, cripples and footpads; the aristocrats occupied the stately houses on the West Side.”

Part of that classic poem Trivia, written in 1716 by John Gay whose later blockbuster musical The Beggars’s Opera broke records at the theatre on the south-east side of the square, is devoted to ways of avoiding being mugged or conned in the fields. Yet in its heyday the square was the place of choice for “people of worth” and most particularly Roman Catholic ones, because they could attend mass at the chapel of the nearby Sardinian embassy.

Following the Reformation, the celebration of mass was banned except in foreign embassies, which were not subject to British law. The Sardinian embassy was one of the most popular. You had to enter through the ambassador’s private residence. It became a target during the Gordon Riots of June 1780. Sparked by resistance to quite modest concessions to Catholics in the Catholic Relief Act of 1778, they exploded into sustained attacks on many buildings that ended up doing more damage to London than the French Revolution did to Paris a few years later. The chapel was demolished in 1909 and is now the site of the Church of St Anselm and St Cecelia.

Number 58 Lincoln’s Inn Fields is believed by Dickens devotees to be where the sinister solicitor Tulkinghorn in Bleak House lived and number 66 has been the home of Farrer & Co, the Queen’s solicitors, who since 1790. This is an example of aristocrats moving out of the square and lawyers moving in. The current building dates from the late 1600s. When owned by Lord Powis it was called Powis House. Subsequent owners included Thomas Pelham-Holles, 1st Duke of Newcastle, who was twice Prime Minister and held lavish parties there in what was by then called Newcastle House. A passageway connecting Lincoln’s Inn Fields to Kingsway passes beneath it.

The west side of the square also contains the Lindsey House at numbers 59 and 60, which has had its name since the 4th Earl of Lindsey moved in there early in the 18th century. Historic England says the mansion’s design is sometimes attributed to Jones (photo above shows it as it was in 1782). It has a remarkable history. Number 59 was the home of the Society for the Diffusion of Useful Knowledge, a fascinating Victorian experiment for spreading knowledge to the masses – a kind of pre-internet Wikipedia. Number 60, whose front door is reached by the same steps, was the home of the square’s other Prime Minister resident, the ill-fated Spencer Perceval, who was assassinated in May 1812 in the vestibule of the House of Commons by a deranged businessman.

Lindsey House also features in the story of Lord William Russell, who was beheaded in the square in 1683 for his part in the Rye House Plot, an attempt to assassinate Charles II and his brother, the future (Catholic) James II, to ensure a Protestant succession. After the execution Russell’s body was taken to Lindsey House where his head was apparently sewn back on. The bandstand in the middle of the square today has a plaque on the floor memorialising this macabre episode, a fitting reminder that the tranquillity of the square should never be taken for granted. 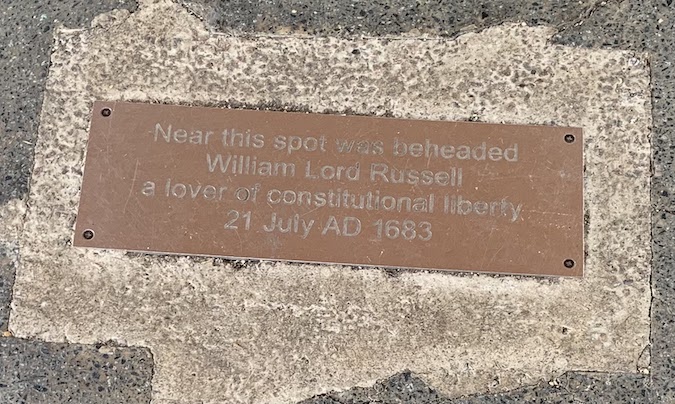 This article is the twelfth of 25 being written by Vic Keegan about locations of historical interest in Holborn, Farringdon, Clerkenwell, Bloomsbury and St Giles, kindly supported by the Central District Alliance business improvement district, which serves those areas. On London’s policy on “supported content” can be read here.